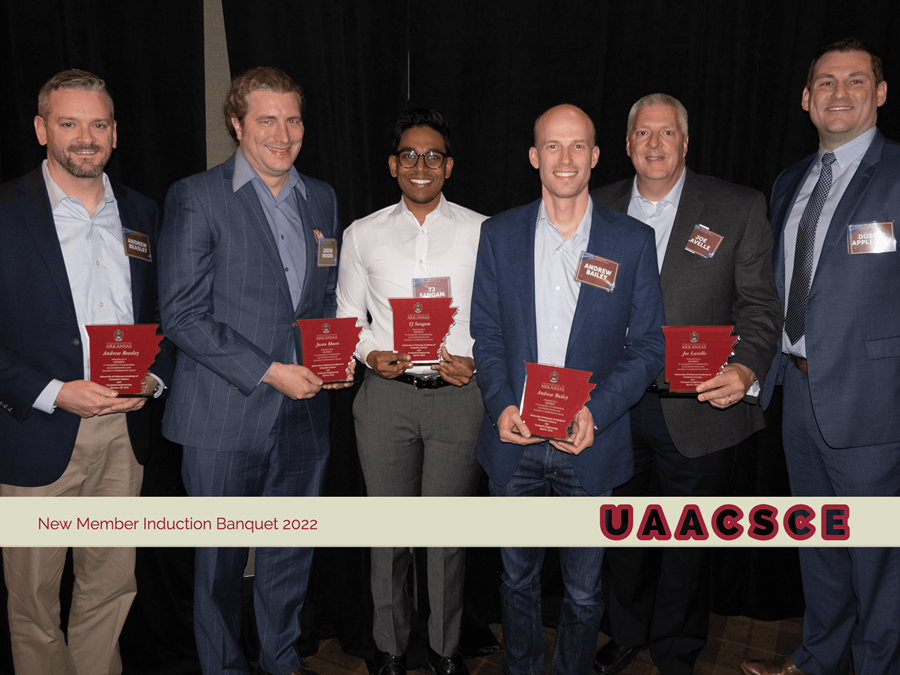 The U of A Academy of Computer Science and Computer Engineering is a prestigious group of alumni dedicated to student service. The academy inducted seven new members at its annual banquet on April 8. Among the inductees were Dustin Applegate, Andrew Bailey, Andrew Beasley, Joe Lavelle, Jason Moore, TJ Sangam and John Taylor.

Applegate graduated from the U of A with his BS in Computer Engineering in 2004 and has since completed his MBA with Walton College of Business. Applegate previously served on the board of Axiom Corporation on business intelligence and customer relationship management solutions issues before joining Alltel/Verizon Wireless, where he rose through the ranks of the data science division. In 2016, he received his first patent, which used wireless network data to extrapolate behavior patterns, usage and customer segmentation in geolocated areas. Applegate joined PNC Bank in 2018, where he built a team focusing on evaluating customer-agent voice interactions for reason and information extraction. Applegate recently became director of data analytics for Genworth.

Bailey holds master’s and bachelor’s degrees in computer engineering from the U of A. Bailey is director of application development and information technology at Harvest Group in Rogers, Arkansas. He is passionate about growing high-performing technology-driven teams and creating tools that help transform the way retail analytics drive sales in physical and online stores. Prior to working at Harvest Group, Bailey was an engineer at JB Hunt Transport Services, where he pioneered new ways to optimize freight network efficiency and create the best pricing software.

Beasley graduated from the U of A in 2003 with his BS in Computer Engineering. Beasley started out as a software engineer for Dillard’s Inc., developing enterprise solutions and helping design and support their intranet sites. In 2007 Beasley joined JB Hunt Transport Services as a programming specialist supporting many large scale technology projects for the company. In 2017, Beasley earned his MBA from the U of A and was hired by Walmart as a consultant on the Total Rewards Analytics and Intelligence team. In 2020, Beasley was nominated by the United States Department of Labor to serve on the Bureau of Labor Statistics Data User Advisory Committee. Beasley is currently Senior Director of Customer Insights at Walmart, where he is responsible for delivering business and customer insights with highly specialized data science teams.

Lavelle is semi-retired after a career in IT and management consulting with Cap Gemini, Anderson Consulting, First Consulting Group and his own company called Results First Consulting LLC. Lavelle graduated from the U of A in 1990 with a BS in Computer Engineering. While at the U of A, Lavelle completed five co-op semesters at General Dynamics in Fort Worth, where he led a team of “real software engineers” to develop data mining and analysis tools and an infrastructure for a great war game simulation. Taking on other projects, Lavelle first left his consulting career to become IT director of a start-up radiology practice management company Radiologix, then COO of a provider of management software. workflow in radiology called Compressus. Lavelle continues to pick up the phone when past clients call and need him to handle large consulting projects when time permits.

Moore earned his bachelor’s degree in computer systems engineering from the University of Alberta in 2001. He received his master’s degree in computer science from Southern Methodist University in 2004 and his Ph.D. in Computer Engineering from SMU in 2014, in addition to an MS in Security Engineering. During her academic career, Moore published magazine articles and 10 articles. Moore currently works as a senior systems engineer at Raytheon Technologies, is an adjunct professor in the Department of Electrical and Computer Engineering at SMU, and an associate professor of computer science at Collin College.

Sangam is co-founder and CEO of SupplyPike, a growing software company in Arkansas. Sangam started programming at the age of 9 using the Commodore Amiga, which led to him earning a BS in Computer Engineering and a Masters in Computer Science from the U of A. Sangam is still active in the community technology and works on projects ranging from web scalability to computational mathematics. and data science. Previously, Sangam worked for Acxiom, JB Hunt Transport Services, Mercy Hospitals and numerous startups.

Taylor arrived at the U of A from Ghana, West Africa. He graduated in 1998 with his BS in Computer Systems Engineering. After graduating, Taylor was a member of the first group of employees to work for Axciom Corporation at the university’s Engineering Research Center. Taylor worked with Axciom for 10 years before moving to Maryland to be closer to family. In Maryland, Taylor worked briefly as an integration specialist at a small company called Message Systems, after which he founded his own e-commerce company, Ghanamart, which he has run for 10 years. Ghanamart helps people living abroad to support their families and loved ones in Ghana and is a one-stop-shop providing services such as the purchase of domestic products, payment of bills, cellular plans and more .

The academy held a business meeting the next morning to elect new officers and board members for the next year of operations. Fred Grigg, the chief enterprise architect for Arkansas’ Information Systems Division, will serve as the academy’s next president. The academy also welcomed Michael Collyar, vice president of information technology at The Fishin’ Company, and Will Arensman, software engineer at Blue River Technology, as new board members. More information about the academy can be found on their website at https://uaacsce.uark.edu.

Two-day virtual training on the drug development process: the key to success, from concept to commercialization (May 12-13, 2022)