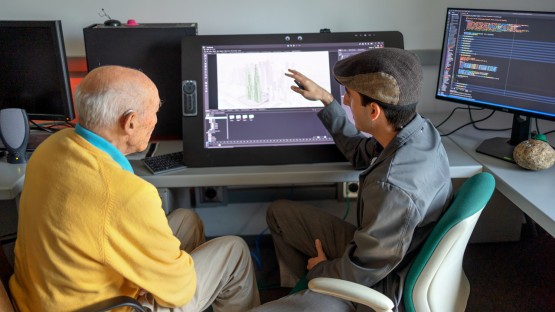 At 88, Greenberg still at the forefront with a new course

At an age when most professionals are well into retirement, Don Greenberg ’55, Ph.D. 1968, showed few signs of slowing down.

Sure, sometimes he feels every moment of his 88th birthday – “I mean, I’m getting old,” he said – but when his day begins he’s as sharp as someone half his age. or less.

“I usually get up around 6am, cook a very simple breakfast, and all of a sudden my mind goes – I can’t wait to get in and start working on something new” , said Greenberg, professor of Jacob Gould Schurman. Computer graphics at the College of Architecture, Art and Urban Planning (AAP).

And Greenberg — whose father, sister, two uncles, wife Iris (’58, MS ’64) and three kids went to Cornell — isn’t just teaching the same old things he’s been teaching since he started at his alma mater over 50 years ago. years ago. As he has done throughout his career, he pushes the limits of his fields.

This semester, he launched a new undergraduate and graduate course for architecture and computer science students, who will learn and apply emerging digital visualization tools and software to design the built environment.

“Design in the Age of Digital Twins”, listed in both AAP and Cornell Engineering, expands the field of 3D digital design by allowing architects and engineers to visually demonstrate, in real time, the effects of factors such as power consumption, sunlight and extreme conditions. weather events early in the design process, when strategic decisions are made.

“If there’s anything I want to know about the physical building, I should be able to find it in the digital twin,” Wolford said. “Obviously you sometimes have rough approximations – you’re not going to see every little speck of dust – but if I wanted to, for example, see what the temperature distribution looks like in all my rooms, I can just look at the digital double.”

Greenberg has been laying the foundations for digital twins since the 1970s.

“In a proposal to the National Science Foundation (NSF) at the time, I said that I would like to be able to make images that are physically accurate and perceptually indistinguishable from real-world scenes,” said Greenberg, founding director of the multidisciplinary Computer graphics program. Kavita BalaDean of Cornell Ann S. Bowers College of Computing and Information Science, did her postdoctoral work in Greenberg’s program.

“Very few people worked in this field 50 years ago,” he said, “and it ended up attracting a lot of people over the next two decades, people who were brilliant and ended up by helping to change the domain”.

However, his ideas didn’t go so well at first. He remembers working with the late Cornell astronomer Carl Sagan on creating digital representations of the topography of Mars, “so that if we ever sent a spacecraft there, we wouldn’t land in a crater” , Greenberg said. The NSF rejected his funding proposal. “We would never do space exploration of Mars,” Greenberg told NSF.

Everyone knows how it happened: in fact, one of Sagan’s postdoctoral associates at the time was Steven Squyres ’78, Ph.D. ’81, professor emeritus of astronomy at the College of Arts and Sciences. science and principal investigator of the science payload of NASA’s Mars exploration rovers.

Around the same time, Greenberg said, he also suggested computer animation to Walt Disney Animation Studios, who said they would never use the technology. In 1986 Pixar was born and its collaboration with Disney Animation led to some of the most beloved animated films of all time.

Greenberg was thesis advisor to Rob Cook, MS ’81, an early software developer at Pixar who shared an Oscar in 2001 for developing the RenderMan software, which produces images used in movies from 3D computer descriptions of shape and appearance. Greenberg said Cook’s is one of at least 18 Technical Oscars awarded to its former students.

Cook said Greenberg was “an excellent guide and mentor” and had a knack for seeing the future of the technologies he taught.

“He’s a broad, interdisciplinary thinker with amazing insight into the importance of research,” Cook said. “And because he remains grounded in scientific foundations, his work has repeatedly led to breakthroughs of lasting significance.”

Greenberg also advised Michael Cohen, MS ’85, who was on the computer science faculty at Princeton University and then spent more than 20 years at Microsoft Research before joining Facebook in 2015.

“Even before the field of computer graphics existed,” said Cohen, “Don knew it would become a ubiquitous tool for scientific and creative endeavours. Without his insight and persistence, the field would not be what it is.” it is today.

Greenberg (1987), Cook (2009) and Cohen (2019) have all won the Steven Anson Coons Award, given for outstanding creative contributions to computer graphics by the Association of Computing Machinery.

“Whenever he teaches something, it’s not just, ‘Let’s learn rendering in the context of computers,'” Tesfaye said. “It’s always, ‘Let’s bring in the context of the materials, of their artistic aspect,’ drawing on all these different things. I’ve always found it super interesting – you end up gaining holistic knowledge of something and not just a specific subtopic.

“That impact of one concept being spread in all these different places really helps you retain information and connect it to new things,” Wolford said. “I think it’s really important to include that in any class you teach.”

Greenberg relies heavily on his teaching assistants and students to learn from and with him. Admittedly, he’s not the most technically savvy person — “If I have to use my iPhone, I’ll go to my granddaughter’s,” he said — and he acknowledges that the classroom is a two-way street.

“In all truth they teach me,” he said. “I’m really proud of the fact that probably close to 90% of the papers I’ve been involved in publishing had students as first authors. It’s Cornell – Cornell is fantastic that way. There is a relationship that never ended, and with this new course, it continues.

Ohio State launches CAFE program for semiconductor research, in collaboration with Intel and other Ohio universities