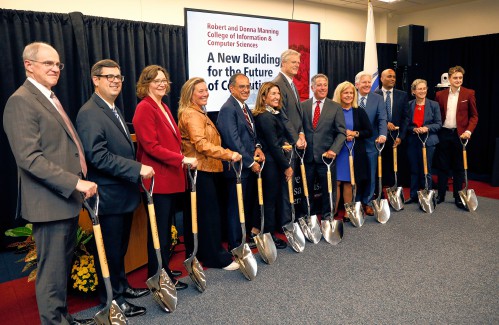 AMHERST – A $125 million building that will allow Manning College of Information and Computer Sciences to expand and diversify enrollment while its students and researchers promote ethics around advanced automation and collaborate with others to address climate change, will soon be built on the University of Massachusetts Campus.

At Thursday afternoon’s groundbreaking ceremony, Governor Charlie Baker, whose administration has committed $75 million to the project, said the new building would mean increased research capacity and a state welfare support.

“This new, state-of-the-art university building will equip students with the resources and skills they need to learn in the classroom and beyond,” Baker said. “It will be, I believe, a very special place in the future.”

Speaking inside the Computer Science Building, Baker said he expects those using the new site to do amazing things, and he couldn’t think of a better organization than UMass for such a company.

“This one, everything is going digital,” Baker said of the 90,000 square foot building that will be built east of the existing building off Governors Drive. “It’s incredibly exciting and absolutely terrifying.”

For outgoing UMass trustees, President Robert Manning and his wife, Donna Manning, who donated $18 million to the college that was announced in November 2021, the idea is to reduce that level of fear. in technology.

Joining the event remotely from New Hampshire, Robert Manning explained that part of the initiative is to promote computer ethics.

“If we don’t have people in society who are watching and are aware of the dangers that may exist, we’re in big trouble,” Manning said.

As the college’s motto is “computing for the common good”, doctoral student Adam Lechowicz said he was excited about the new building because climate change is an issue for his generation and future generations, and he is convinced that computing and information technology are among the best placed to tackle the problem.

“Computing will be an essential tool in dealing with the effects of climate change,” Lechowicz said.

Scheduled to open in the spring of 2025, when completed, it will be the first building to meet the university‘s net zero goals for the campus. It will also allow the expansion of the current 280 doctoral students, 400 master’s students and 1,700 undergraduate students, and 74 professors.

“Today marks a major milestone in advancing Manning College of Information and Computer Sciences’ mission as a world-class center for education, research and innovation,” said Marty Meehan, President of UMass.

Meehan praised Baker and Lt. Gov. Karyn Polito for the state’s support and the Mannings for the giveaways they’ve given throughout the UMass system, citing ongoing projects at the Boston and Lowell campuses.

“This new building is essential for this plan to come to fruition,” Subbaswamy said.

The Chancellor also said those who work and study at UMass will ensure that artificial intelligence is safe and fair, uphold ethics, and promote a safe online environment for children.

Laura Haas, the college’s dean for five years, said the project will create a truly inclusive college community. “We are united in our desire to improve the well-being of society,” Haas said.

Professor Prashant Shenoy explained that the new building will include a creative space, undergraduate and graduate common areas, research labs focusing on artificial intelligence, quantum computing and robotics, a 24-seat auditorium and a coffee.

“We look forward to an exciting new building worthy of our national status,” Shenoy said.

Polito and administrators Steve Karam and Mary Burns also spoke at the inauguration.

Baker used the occasion, during which he was accompanied by his wife, Lauren, and making his first visit to the flagship campus, to praise Subbaswamy’s tenure as chancellor.

“You are the gold standard by which all chancellors of all public research universities should be measured,” Baker said.