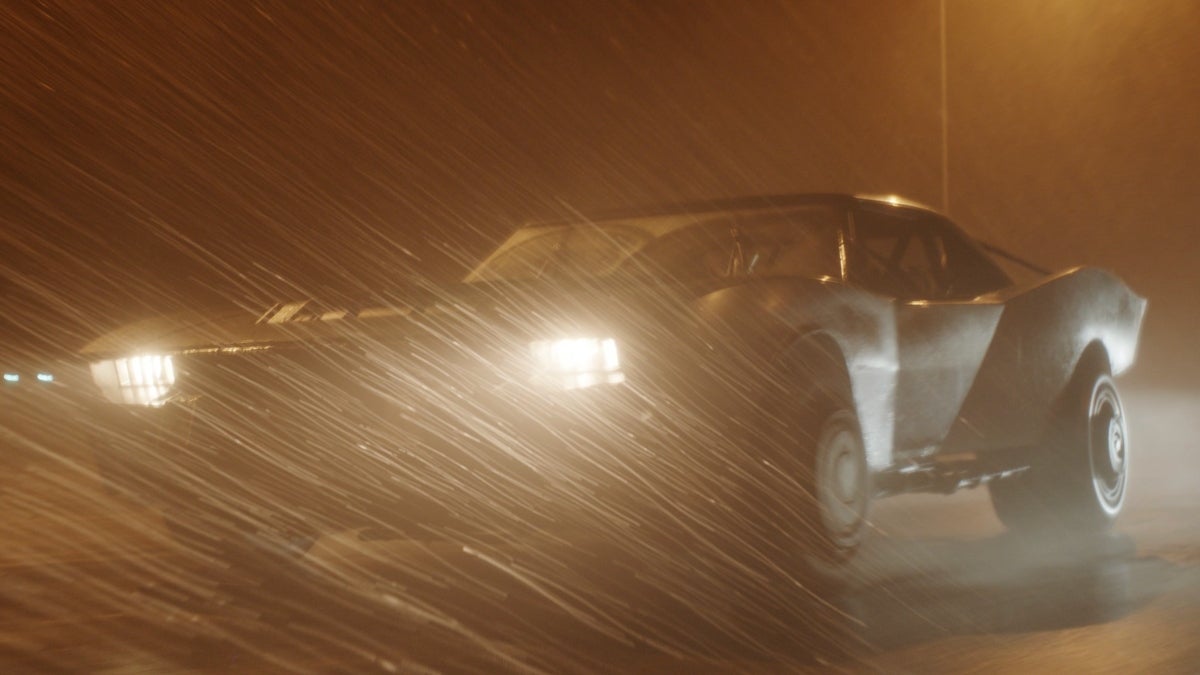 Batman’s Car Chase Explained: How They Did It

Matt Reeves’ “The Batman,” now streaming on HBO Max and available to buy on various digital platforms, is packed with jaw-dropping set pieces that rank among the best in modern superhero cinema – on Halloween night of prowling Batman; the final in the stadium; Batman’s visit to Falcone’s club. But there’s one scene that stands out above all the others: the very rainy nighttime car chase. (“The Batman” is so rainy that “Seven” sounds like “Lawrence of Arabia.”)

In the sequence, Bruce Wayne/Batman (Robert Pattinson) goes after the Penguin (an unrecognizable Colin Farrell) in his bloated Batmobile, which is perhaps the most hot-rod-y version of the iconic car ever filmed. After a brief false start, Batman charges after the villain, following him down a rainy and extremely crowded highway. In an attempt to lose his pursuer, the Penguin causes a calamitous pileup. But that doesn’t stop Batman. (Do something ?)

TheWrap spoke with Anders Langlands, VFX supervisor on “The Batman” for Weta FX, who explained how this sequence was accomplished.

According to Langlands, Weta FX wasn’t the series’ first effects house. After production started, “they wanted to rearrange some things”. “We got there a little later than some of the other things we’ve done, so we had to take a step back to put it all together,” Langlands said. They had previously done the live photography at a location called Dunsfold Aerodrome, an unlicensed airfield in Surrey, England, which is probably best known for being where the BBC series “Top Gear” is often filmed. They had half a mile of track to work on, plus extra vehicles and practical effects. “They were trying to do as many stunts, behind closed doors, as possible, that was the original plan,” Langlands said.

When Matt Reeves started looking at the footage, he discovered that some of the action was unclear. “Matt is very particular about making everything feel logical and logical, and so there were a number of story beats that he wanted to get across for audiences to understand,” Langlands. Several things needed to be clarified: how wet the highway was supposed to be, with several hydroplaning vehicles on the road. (Yes, the rain is all digital. More on that later.) And the other thing was the series of events that serve as a chain reaction towards the end of the sequence, after the Penguin slams the brakes.

Langlands describes the footage as “a one-minute or two-minute rolling accident, with vehicles colliding with each other”. It was up to Langlands and the Weta FX team to plan “all the different events that unfold from that initial moment.” They plotted the sequence – “this truck is sliding, which crosses Batman’s path, it breaks and swerves, then another truck starts like breaking, hydroplaning and flipping over, then it goes into the bridge, in the overpass. And then it hits the tanker in the back and it leads to the overturning tanker.

Of course, that fuel tanker sets off an explosion that leads to arguably the coolest shot in a sequence that’s all cool shots, something Langlands fully acknowledges. The Penguin thinks he lost the Batman – or maybe killed him – only to see him leap out of the flames. It was in pretty much every marketing piece for “The Batman” for a reason. It’s damn cool.

Weta FX needed to figure out “the geography of where each vehicle led to this and how they moved relative to each other,” including where the Penguin and Batman cars are, with the end goal being to s ‘ensure that ‘the public can understand where all the vehicles are and how they were all moving together.

While the early part of the sequence had practical elements filmed on location, towards the end of the chase many shots go completely digital. “We found that we needed to trade in some vehicles,” Langlands said. In the initial version of the sequence, the tanker was not a tanker at all; it was a small delivery van “which had a small explosion hazard label painted on the side, which no one could see”. Langlands and the Weta FX team had to make it more obvious what was going on and where the fireball was coming from. They had to move vehicles to get there. “In order to get all of those story points across, it became much easier to make a lot of the background of the footage completely digital,” Langlands said.

That’s when the animation team at Weta FX got involved. They worked with Reeves in the editorial, trying to refine the plans. Some of the shots were conceived and executed during this process, working with the original footage which now served as what Langlands calls “visual reference material”. “Our animation team spent a lot of time refining those beats and giving Matt and his editing team updates to allow him to try things out in the cut to see what works and what doesn’t. didn’t work,” Langlands said. The challenge was to convey important narrative beats and establish geographic and spatial relationships in a sequence that was put together using relatively quick cuts (especially compared to other sections of the film), “getting it all across very few images to tell the story. ”

Another challenge was making sure all of this was transmitted while being in the midst of what could easily be described as near-monsoon weather. “If you’re driving down a highway at night when it’s raining cats and dogs, you can’t see much at all, just like in the real world,” Langlands said. “We had to slow things down a bit, but still find that sweet spot where it still felt wet enough for Matt for what he was trying to get across.”

This is where perhaps the most impressive movie magic came in – the computer-generated rain. Langlands said most of the footage was shot dry due to the inherent safety complications that would be involved in filming the wet footage. (They also couldn’t set up a rain machine long enough to “cover moving vehicles.”) Instead, the team opted for a simpler route. And by “easiest route” I of course mean “the most complicated route possible”, adding the rain later via Weta FX magic.

Langlands and his team were tasked with creating several elements associated with rain – the “actual rain falling itself, mist and spray from the wheels of vehicles driving on the ground”, as well as “small splashes of impact individual spots where the raindrops hit the ground. And while that might still seem relatively simple, it turns out that it’s not so much the case.

“Rain is one of those things that looks really easy and when you have a static camera it’s relatively easy to accomplish,” Langlands explained. “But when everything is moving really fast and you have a lot of little light sources, like you do with all the car headlights and all the streetlights on the side of the road, it actually becomes a pretty complex thing to simulate because that like a falling raindrop, isn’t just like a little teardrop shape, like a cartoon version of it. Instead of a classic cartoon teardrop, as Langlands explained, it is a sphere of water that “oscillates, stretches, crashes and changes shape as it descends”.

The Weta FX tried to simulate raindrops “exactly” – how light catches it, the differences between a practical effect and something the human eye recognizes as real rain – but it turned out” far too computationally expensive to actually be staged”. Channeling the greatest detectives of their inner world, they found an approximation that could be rendered fast enough to actually be used. This approach “gives the whole scene a nice feel and the way it plays with the lights worked really well.”

“The Batman” is still playing in theaters, currently streaming on HBO Max and on sale on digital platforms now.