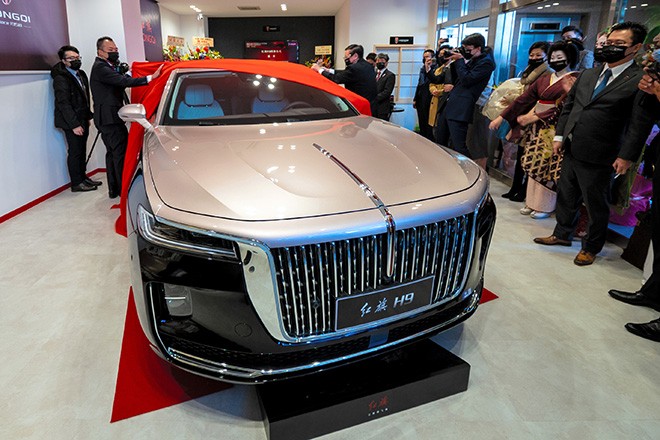 A leading Chinese automaker is looking to find a difficult entry ramp into the Japanese domestic market with its first dealership in Japan offering expensive luxury sedans.

The first Hongqi dealer of Chinese automaker FAW Group Corp. in Japan opened in Nanba District in Osaka on December 19.

To celebrate the brand’s first store in Japan, Changchun Municipality in northeast China’s Jilin Province, where the FAW Group is located, sent a telegram saying, “The people of Changchun and from all over China are proud of Hongqi. The importance of selling cars in Japan cannot be overstated. “

Trying to break into the Japanese car market, dominated by national brands, the Osaka dealership symbolizes the forays of Chinese manufacturers, even in a difficult market like Japan.

The new dealership offers Hongqi, a premium car brand, with an H9 sedan on display in its showroom on the first day of opening. In China, Hongqi has built a large brand customer base, with some of the country’s political leaders among its users.

The new dealership will market four types of cars including a gasoline-electric hybrid for the time being. Next year, it will offer five more vehicle models, including an electric sport utility vehicle (SUV). The automaker is also considering opening a dealership in Tokyo.

Hongqi models are aimed at well-heeled car buyers, with some selling for over 10 million yen ($ 88,000).

Currently, imports hold less than 10 percent of the Japanese passenger car market. Domestic brands enjoy a high level of consumer confidence and some foreign automakers, including a South Korean, have left the Japanese market.

An executive from a Japanese automaker said that brand strength is all that matters in the domestic market.

“Hongqi’s success in the Japanese market depends on whether there really are drivers who want these cars,” said the executive.

FAW Group’s offer to enter Japan despite difficult market conditions shows how Chinese automakers are becoming strong enough to compete in the global market. They have already exported utility vehicles such as electric buses to Japan.

Previously, the advantages of Chinese products for consumers were their low prices, but now many times their quality and functions match those of Japanese manufacturers. Almost 25% of goods imported to Japan in 2020 came from China, the highest figure on record.

Labeling “Made in China” is now increasingly important in many areas such as televisions and smartphones, posing fierce competition to Japanese companies.

(This article was written by Naoyuki Fukuda in Osaka and Akihiro Nishiyama in Beijing.)

The limitations of designing a course that can pivot