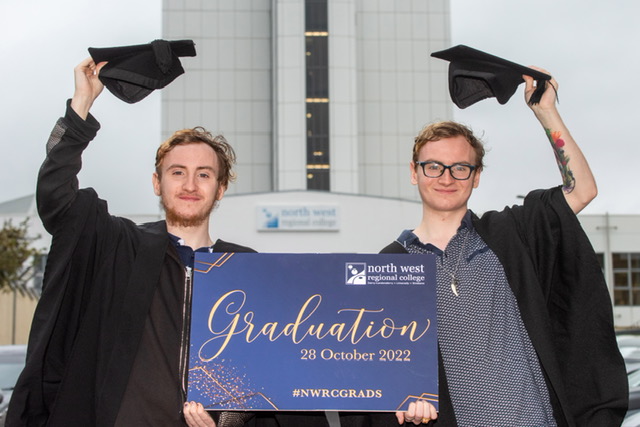 Identical twin brothers who studied for the same higher education course will be among nearly 600 students to officially graduate from North West Regional College this Friday (28 October).

It’s a double celebration for 21-year-old Shane and Brandon Furey, who both completed the Performing Arts HND at the college’s Strand Road campus. The brothers are currently on a gap year before deciding their next steps in the world of theater and performance.

The twins, who were previously students at St Joseph’s Boys School in Creggan, said they were inspired to pursue their dream of acting by former teacher Sean O’Kane who encouraged them to enroll in the NWRC. Sean sadly passed away in January 2022 after battling illness.

Shane said: “Sean O’Kane was the inspiration for me to come to the NWRC and I’m now getting the most out of what I want to do thanks to him. I enjoyed my time at college and would recommend it to anyone looking to work in this industry.

Brandon added that he had a great experience at the NWRC, learning alongside his twin. He said: “Shane and I have both been on shows like Moulin Rouge and the college pantos. Being twins in the same class can have its ups and downs but it was a great experience as we share the same circle of friends.”

Nearly 600 students will be recognized as graduates of the College’s Class of 2022 at the Higher Education and Access Graduation Ceremony, which will be streamed live on YouTube, from the Millennium Forum on Friday, October 28. at 12.

Honorary awards will be given to former NWRC student and BBC journalist Sarah Brett and Gavin Killeen, who will be recognized for their contributions to the economy and education. The event MC is BBC TV and weather presenter Barra Best.

NWRC Principal and Chief Executive, Leo Murphy, said: “The entire university community looks forward to Friday’s event when we celebrate the achievements of our students. We are very proud of our higher education program at NWRC which we continue to develop, and we are delighted to be able to offer these university-level courses on our three campuses, giving people from the region the opportunity to study locally. My congratulations to all of our students celebrating their graduation and our best wishes for the future.

Graduates in art and design, business, IT, construction, engineering and science, hairdressing and beauty therapy, early childhood, health and social services, hospitality, tourism, sports, media, music and performing arts will gather at the Millennium Forum with friends and family to mark the successful completion of courses taken at the College’s Strand Road, Limavady and Strabane campuses.

You can stream the event live on the NWRC YouTube channel – search for North West Regional College, starting at 12 p.m.

The world premiere of “Launch Day” sets a steady course