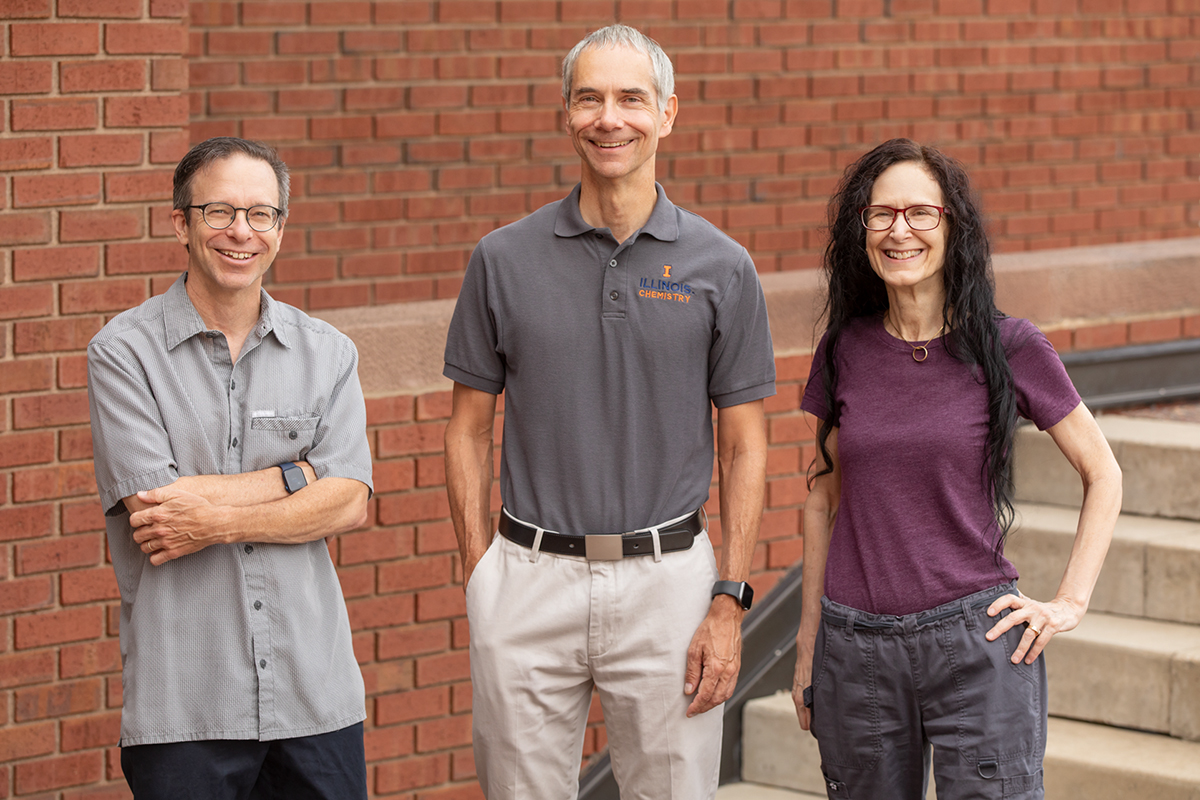 A team of researchers from the University of Illinois at Urbana-Champaign are using sonification – the use of sound to convey information – to describe biochemical processes and better understand how they occur.

Music teacher and composer Stephen Andrew Taylor; chemistry professor and biophysicist Martin Gruebele; and Carla Scaletti (MS ’88), an Illinois music and computer science alumnus, composer, and software designer, formed the Biophysics Sonification Group, which has met weekly on Zoom since the pandemic began. The group experimented with the use of sonification in Gruebele’s research into the physical mechanisms of protein folding, and their work recently led Gruebele to make a new discovery about the ways a protein can fold.

Taylor’s musical compositions have long been influenced by science, and recent works depict scientific data and biological processes. Gruebele is also a musician who has built his own pipe organ which he plays and uses to compose music. The idea of ​​working together on sonification appealed to them and they have been collaborating for several years. Through his company, Symbolic Sound Corp., Scaletti develops digital audio software and a hardware sound design system called Kyma that is used by many musicians and researchers, including Taylor.

Scaletti created an animated visualization paired with sound illustrating a simplified protein folding process, and Gruebele and Taylor used it to introduce students to key concepts of the process and assess whether it helped their understanding. They found that sonification complemented and reinforced visualizations and that, even for experts, it helped increase intuition of how proteins fold and misfold over time. The Biophysical Sonification Group – which also includes chemistry professor Taras Pogorelov, former (now former) chemistry graduate student Meredith Rickard, composer and pipe organist Franz Danksagmüller from Germany’s Lübeck Academy of Music, and Illinois electrical and computer engineering alumnus Kurt Hebel of Symbolic Son – described using sonification in education in the Journal of Chemical Education.

Gruebele and his research team use supercomputers to run simulations of proteins folding into a specific structure, a process that relies on a complex pattern of many interactions. The simulation reveals the multiple pathways that proteins take when they fold, and also shows when they fold incorrectly or get stuck in the wrong shape – something thought to be linked to a number of diseases such as Alzheimer’s disease and Parkinson’s disease.

Researchers are using simulation data to better understand the process. Almost all data analysis is done visually, Gruebele said, but massive amounts of data generated by computer simulations — representing hundreds of thousands of variables and millions of moments in time — can be very difficult to visualize.

“Everything in digital audio is a stream of numbers, so it’s only natural to take a stream of numbers and listen to it as if it were a digital recording,” Scaletti said. “You can hear things that you wouldn’t see if you were watching a list of numbers and you wouldn’t see if you were watching an animation either. There’s so much going on that there might be something hidden, but you can bring it out with sound.

For example, when the protein folds, it is surrounded by water molecules essential to the process. Gruebele said he wanted to know when a water molecule hits and solvates a protein, but “there are 50,000 water molecules moving around, and only one or two are doing a critical thing. It’s impossible to see.” However, if a splashing sound occurred each time a water molecule touched a specific amino acid, it would be easy to hear.

Taylor and Scaletti use various audio mapping techniques to link aspects of proteins to sound parameters such as pitch, timbre, volume, and pan position. For example, Taylor’s work uses different locations and instruments to represent each unique amino acid, as well as their hydrophobic or hydrophilic qualities.

“I tried to rely on our gut responses to sound as much as possible,” Taylor said. “Beethoven said, ‘The deeper the current, the deeper the tone.’ We expect an elephant to make a low pitch because it’s big, and we expect a sparrow to make a high pitch because it’s small. Certain kinds of mappings are embedded in us. As much as possible, we can take advantage of it and it helps to communicate more effectively. »