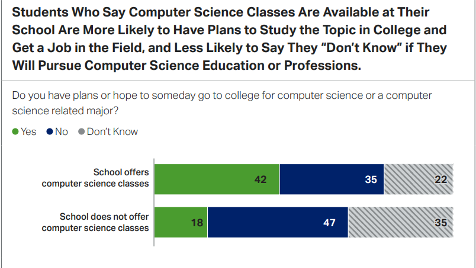 Lack of access to IT resources, not lack of interest, negatively impacts students from under-represented groups

A study released today by Gallup and commissioned by Amazon Future Engineer sheds light on the impact of school, mentors and support on children’s interest in computing and their willingness to continue their education as well as a career in IT. Future Amazon engineer is a childhood-to-career program designed to inspire and educate students around the world, including hundreds of thousands of students in the United States each year. The goal is to help students develop skills that take advantage of computers and coding to be ready for what the future job market will demand of them. By 2021, the program is on track to meet its goal of reaching 1.6 million students from historically under-represented communities around the world. In the United States, that means providing more than 6,000 schools with a computer science curriculum, teacher support, and professional development.

The new study Developing the careers of the future: a study on student access and interest in IT the results are based on an online survey conducted from June 2 to 20, 2021, among a sample of 4,116 students in US public and private schools in grades 5 to 12. While some of the data did not come as a surprise, the impact of the intersection of location, rural versus urban, socioeconomic status, gender and race clearly indicates the need to address what has become a systematic lack of access.

Pedrito Maynard-Zhang, Ph.D., Senior Software Development Engineer, Amazon Future Engineer, said in a video interview: â€œWe know that many students, especially those in underserved areas and [historically] under-represented communities, lack computer learning opportunities and exposure to the field. We need to know where these gaps exist in order to ensure that Amazon Future Engineer has maximum impact. This new research with Gallup helps us do just that.

Schools play a central role in stimulating interest in IT

Sixty-eight percent of students who say that computer classes are offered at their school are interested in learning more about the subject, compared to 49% of those in schools that do not offer classes. Students with access to school-based computer courses are also more than double those without saying they plan to study the subject in college (42% vs. 18%, respectively) and aspire to have a employment in the field (43% against 15%).

In addition, school plays a vital role in shaping interest in computers as 75% of students said they learned computer science in a classroom at school, compared to 23% who said in a group or a club at school and 25% learned from a family member or friend.

Getting access to the courses, however, is only half the battle. The quality of education is very important. Unsurprisingly, how students perceive a class also impacts their willingness to deepen their computer literacy and even pursue a career in the field. Overall, 47% of students who took a computer class strongly agree that it was fun, while 41% somewhat agree and only 12% disagree. Additionally, two-thirds of college-going students who strongly agree that their computer class was fun (68%) say they plan to study the subject in college, compared to 28% of those who tend to agree and 10% of those who disagree.

The intersection of income, race, and access becomes very clear when looking at the data among inner city children. In large cities, there are significant differences by race / ethnicity in access to computers. Overall, white students are slightly more likely (73%) than black students (65%) to say that computer classes are available at their school.

However, when you consider the large cities where residential segregation by race and ethnicity is more common, the gap widens considerably: 67% of black students in these cities say that computer classes are offered in their school, compared to 88% of white students.

Overall, about half of students strongly agree (26%) or somewhat agree (27%) that they have role models in computer science. White and Asian students are a little more likely than Black and Hispanic students to agree, and boys are a little more likely than girls to agree. Camille Lloyd, director of the Gallup Center on Black Voices, says, â€œBlack girls are significantly more likely than others to talk about IT with their peers and to engage in IT outside of school. Research indicates that there are programs, especially with the participation of role models, that can work with traditionally untapped groups.

The presence of behavioral patterns is a powerful predictor of the likelihood that students will say that they are considering or hoping to one day have a job related to computers. For example, among students who strongly agree to have role models in computer science, 73% hope to one day have a career in the field, compared to 7% of those who strongly disagree that they ‘they have models.

â€œThis strong connection between having role models and students’ IT career plans is exactly why our new ‘Meet an Amazonian’ experiences were created – to show students who are like them and where. IT can lead them, â€explains Maynard-Zhang.

Since the first pilot test in April, Amazon Future Engineer ‘Meet an Amazonian experiences have already reached more than 140,000 students from nearly 2,000 US schools eligible for Title I. The program will expand to 3,000 schools in Canada. Title I by the end of the year.

One of the experiences offered are Classroom Discussions, which provide classrooms with virtual career discussions and exposure to technology professionals, from technology software development engineers to marketing or program support roles, all aimed at increasing students’ interest in computer science and their understanding that the skills acquired through computer science will be beneficial, whatever job opportunity they decide to pursue.

As Lloyd says, “There is so much untapped potential and unmet demand.” The Amazon Future Engineer program helps meet part of this demand. However, it is essential that school districts and local government not base their decisions about funding computer courses on the interest they generate in students who do not yet have the opportunity to learn. From the students’ point of view, it’s very simple, says Lloyd, “They can’t explore what they’re not exposed to.”

“Why abstraction in art took its course”