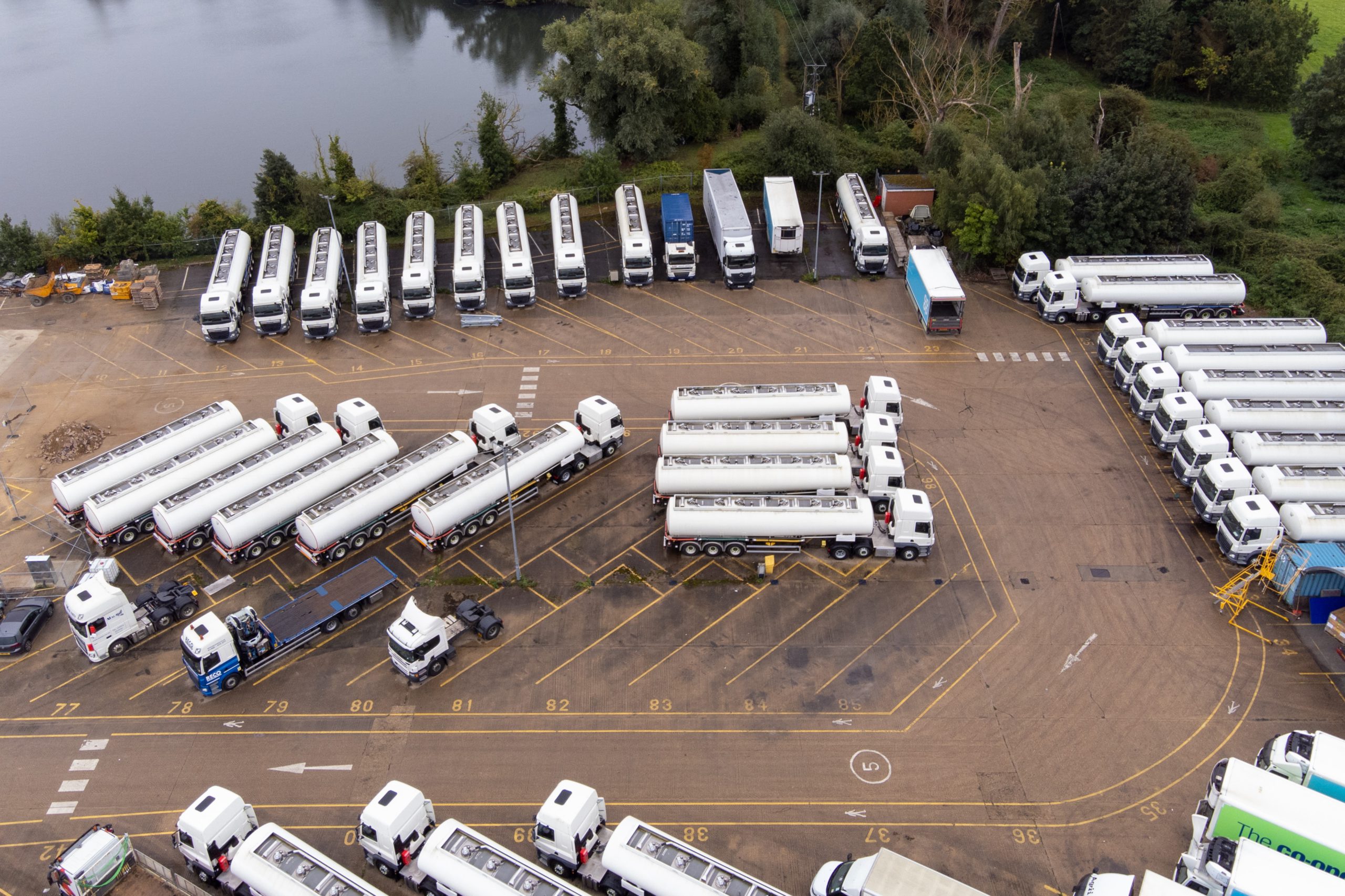 Scenes of UK supermarket shortages have revealed an issue the transport industry has been warning about for years: the shortage of truckers. In the British case, the Brexit factor has put even more obstacles for foreign workers, in an aging sector, with harsh working conditions that worsen and without clear generational change. Transport organizations warn that this is a widespread problem in developed countries and as the profession evolves, they estimate that Europe needs 400,000 drivers to meet the demand of the sector.

In 2020, a fifth of truck jobs were unfilled in Asia and Europe. The World Road Transport Organization (IRU) warns: â€œThis is a chronic problem for a long time. The median age of truck drivers is over 50, but young people do not see the profession as an attractive option. The unions stress that deregulation, liberalization of the sector and its relocation to third countries with lower wages have weakened the industry. In 2020, the percentage of drivers under 25 was 5% in Europe and Russia, 6% in Mexico and 7% in Turkey. In addition, only 2% of truck drivers are women. “If there is no relief, we will end up with a lack of drivers,” warns Juan JosÃ© Gil, secretary general of the National Federation of Transport Associations of Spain (Fenadismer). “This implies that the goods cannot be supplied.”

Analysts estimate that 400,000 drivers are needed in Europe, data they extract from the evolution of the sector and the average age of truckers. According to a study by the Transport Intelligence research group, the country most affected is Poland, which needs more than 120,000 transport professionals; in Germany, the figure fluctuates between 45,000 and 60,000; France needs around 43,000, and the crisis has revealed that the UK needs around 90,000. â€œSpain is not among the worst-case countries, it is estimated that ‘ it would take 15,000, or less than 5% of the total workforce of active drivers, “says Gil, who points to the economic recovery after the pandemic as another factor of pressure.

“Whenever there is economic growth or a recovery like the current one, there is a greater demand for transport because there is a greater need to supply goods and transport companies with their usual staff cannot not meet this demand, it means that they have to enter the labor market to look for drivers and, unfortunately, despite the high percentage of unemployed in this country, we do not have a pool of drivers to cover the needs â€, explains the manager of Fenadismer. In the United Kingdom the problem has worsened with Brexit “foreigners cannot continue to work and they have reduced the pool of potential drivers, a profession which is no longer attractive”. And that takes a lot of sacrifice. “You spend many days sleeping away from home, it’s lonely work, in a three cubic meter cabin, nine hours behind the wheel, which isn’t just driving, ma unfortunately they are obliged to load and unload the goods when they arrive at their destination and this is something that we have asked to be banned as Portugal has done â€, emphasizes Gil.

Images of empty shelves in the UK and brawls in lines at petrol stations have served to open eyes to the demands of associations like the European Transport Federation (ETF), which represents more than five million workers. of 200 transport unions from 40 countries, who regret having received the attention “only now that we see and feel in our daily lives the direct effects of the shortage of drivers reflected in the fuel crisis or in the lack of food and other products in our stores, â€said General Secretary Livia Spera. Organizations also demand security and basic services for the dignity of the profession. In the EU, there is a deficit of 100,000 special parking spaces for trucks to meet total demand, and only 7,000 of the 300,000 (less than 3%) are in certified safe and protected areas, according to the ETF. “Young people and women are not interested in a job that lacks decent working conditions,” said the union.

The problem, the long distance

It is a complex sector to which new factors are added. â€œIn recent years, many drivers have opted for short-haul transport. Services such as parcels or short-haul shipping have increased which means spending a maximum of one night away and, although cheaper, the rest of the week they sleep at home â€ , explains DulsÃ© DÃ­az Fresno, Deputy Secretary General of the Spanish Confederation. freight transport (CETM). The problem is with long distance journeys. DÃ­az insists on the demand for work and the treatment of the drivers, recalls that during the pandemic they were not allowed to enter a logistics platform to use the toilets, but they were required to unload the truck. “It’s a shame and makes it difficult for the woman to arrive [a la profesiÃ³n] they are fantastic drivers from the point of road accident â€. Another problem is that “the EU is a single market and at the end of the day you are competing with countries which have much cheaper labor and which keep transport prices low” .

Among the proposals to make this job more attractive, they point to measures that make the profession less difficult, such as the prohibition of loading and unloading, the establishment of secure parking areas and a plan to facilitate obtaining the job. driving license weight by the unemployed – which is between 3,000 and 6,000 euros – because, according to the general secretary of Fenadismer, “there is safe work here”.

“This vocation without vocation cannot be done”

Associations agree that after long hours of driving and weeks away from home, which were previously compensated by a good salary, they face less financial compensation and, above all, the pressure to perform other tasks in addition to carrying out the goods. A situation that BegoÃ±a Urmeneta is familiar with, a truck driver who has been behind the wheel for more than 25 years for whom this profession is “a passion”, but who sees with sadness how much interest among the youngest is growing. disappear.

“This vocation without vocation cannot be done”, he assures by telephone from the port of Valence where he is with his oil tanker of 40,000 kilos. For Urmeneta, what happened â€œis just the tip of the iceberg, people are not aware of what is coming. This does not come from now, neither from Brexit, nor from the pandemic â€, but from a degradation of the profession that he ensures that began 20 years ago. “Gradually, they started to lower not only wages, but also working conditions, which are much more important than wages.” He complains that he now has to unload his truck, regardless of his meal times and breaks, as well as the unfair practices of some companies to hire foreign workers in worse conditions.

“I’m retiring in eight years, my generation came in because you like the truck, the next one came because there was nothing else to work with and they’re the ones who don’t want their kids get into a truck. A mother of two, Urmeneta quit her job as a waitress when an opportunity arose in her husband’s business to get on the truck. In his case, his 31-year-old daughter will be the one to follow in his footsteps. Her son, 34, is a computer scientist. “A lot of people who came in out of necessity are bitter,” she laments, and remembers when she first got into her husband’s truck and sat in the seat of the driver, she had no doubts: “My head and my heart said this is what I want to do”.

“As long as they don’t really get involved in solving the problem, it will get worse, in 10 years, let’s see who brings you the shoes, the washing machine, the food?” He knows it is not easy, but he thinks it is necessary to start with a plan for conditions to improve and reduce the time spent away from the family. â€œThere is no need for a man to take a truck from Huelva and go through England, then Germany, then to Poland, then down to the Czech Republic and Italy before coming to Spain. With the technology that exists, with the train lanes that exist, it is not necessary for a truck driver to spend a month away from home â€.

Perfect photos with your smartphone: what is the price?