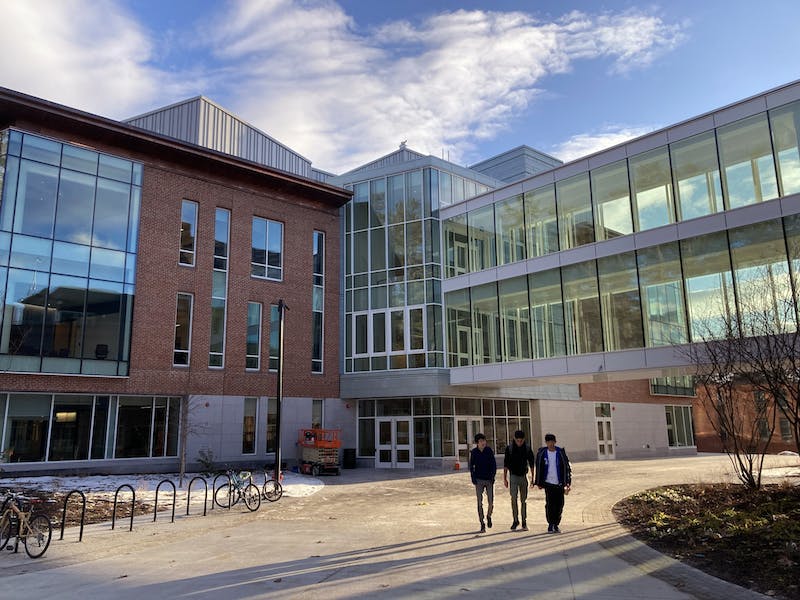 While many rent the building to provide new space for campus departments and organizations, some have criticized the lack of available space.


In March, the College unveiled the new Engineering and Computing Center, a 160,000 square foot complex at the end of Tuck Drive, to positive feedback from students and faculty. The $200 million building, which began construction in October 2019, was designed by architectural firm HGA and funded entirely by donations. The inauguration of the building is scheduled for this spring.

The project was conceived as part of the Call to Lead campaign and combines the Department of Computer Science, the Magnuson Center for Entrepreneurship, the Digital Arts, Learning & Innovation Lab, the College’s Electron Microscope and parts of the Thayer School of Engineering in a single building, according to the computer department website. The Center is also doubling the size and potential number of faculty at the existing Thayer Engineering Complex, according to HGA website.

“Being able to have engineering, IT and the Magnuson Center for Entrepreneurship under one roof, I think only great things are going to happen,” said Thayer Dean Alexis Abramson. “We will definitely see more educational opportunities like curricular and extracurricular things start to happen.”

According to DALI Lab Director Tim Tregubov, computer science students now have easy access to the Thayer Maker space and other building technologies, which were previously in what felt like “a world apart”, 800 meters on foot from the former housing of the IT department. at Sudikoff. Tregubov added that the architecture of the ECSC – which consists of a shared entrance, large atrium and abundant natural lighting – facilitates community and collaboration, especially compared to the “gloomy” Sudikoff. .

“I think those casual conversations that you get as you walk through a hall — a single, shared entry point — are very important,” Tregubov said. “They spur a lot of creativity, innovation, because you see someone and you’re like, ‘I thought about telling you about ‘X’.”

Students and faculty have responded positively to the building’s architecture and offerings.

Daniel Westphal ’23, a modified computer scientist with a major in human-centered design, agreed that the space “adds to the CS community,” also highlighting the building’s architecture and shared learning spaces.

“It’s a beautiful building,” he said. “There are a ton of lecture halls that are really conducive to group study, and it’s very exciting overall…to have a new place on campus to explore that we haven’t seen yet, especially considering Sudikoff’s age.”

Thayer’s associate dean of undergraduate education, Douglas Van Citters, also praised the building’s open spaces and frosted windows that surround internal workspaces, noting that they allow occupants to detect the activity of others without violating privacy. He added that the architecture encouraged students to visit the space.

“We’re bringing the entire Dartmouth campus to this building,” Van Citters said. “It doesn’t feel like it’s the engineering building. As a former Dartmouth, I love the ‘One Dartmouth’ feeling that comes with it. »

The new construction also offers parking for 340 vehicles, according to the website, as well as bicycle storage, changing rooms, showers and nursing rooms, said Lorie Loeb, director of the DALI laboratory faculty and professor. computer science research. Among the building’s classrooms and lecture halls are three technology-enabled active learning (TEAL) classrooms, featuring large screens and pod seating, Tregubov added. Loeb said that “the whole [architectural] team” was “super responsive in terms of [audiovisual] needs and try to ensure that [the building] works for everyone.

Abramson said the Back of the Napkin Cafe, named to reflect the Center’s spirit of innovation and entrepreneurship, will hopefully open within the next two months.

In addition to the new café, the building will continue to change as it adapts to the needs of the community, including fixing minor design flaws, such as a power box obstructing a projector, lights refusing to dimming, doors knocking in lights and malfunctioning paper towel dispensers. , according to Van Citters and Loeb. Van Citters explained that these issues are just “growing pains” associated with a new building and won’t be a long-term problem.

“I would rather have [these minor design flaws] than something that doesn’t work because it’s too old and broken,” Van Citters said.

According to Abramson, some faculties and research labs have yet to move into the new building. As of now, the entire computer science department has moved and the entire biological and chemical engineering faculty will move shortly, she said.

While CECA opened its classes in the spring, the building does not contain auditoriums for extra-large classes. Westphal said some peers are still taking courses elsewhere, due to large course rosters. Van Citters explained that students can instead use the lecture halls in neighboring buildings, such as Cummings Hall, which seats 120 to 130 students.

“I think the space we have is extremely valuable,” Van Citters said. “[Small classrooms speak] more to the hands-on education that computer science and engineering provide.

Despite minor technical problems, Van Citters expressed his gratitude for the building’s completion.

“At the end of the day, someone had a vision and that vision is shared between the leaders who made it happen and the people who gave the money to make it happen,” Van Citters said. “I really want that gratitude to come from everyone here, because it’s awesome. It makes my job so much more rewarding.

NEPRA will collaborate with the GIK Institute on faculty research

What explains the success of postgraduate computer science programs?