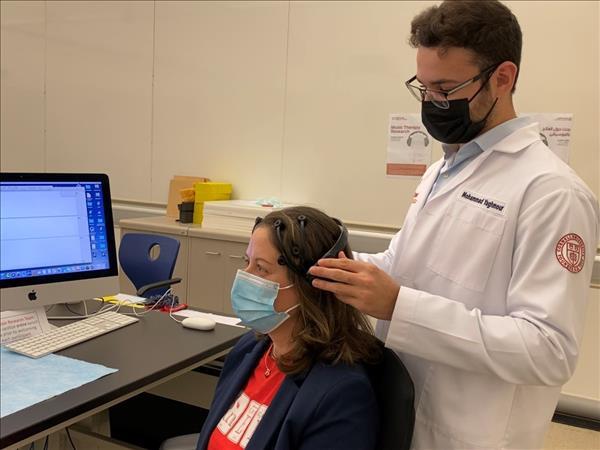 Doha: Researchers from Weill Cornell Medicine-Qatar (WCM-Q) explored the cognitive and neural bases of human creativity by monitoring the brain activity of a musician improvising on the ney, or Arabian flute. The research has been published in Frontiers in Psychology, a leading journal, and is the first scientific study of the neuromusicology of music in the Middle East.

Led by Dr Ghizlane Bendriss, PhD in Neuroscience and Assistant Professor of Biology, the team of researchers used a wireless electroencephalographic (EEG) headset to record a musician’s brain waves as he performed a total of 24 improvisations. at low, medium and high tempos. on the ney.

Dr Bendriss conceived this project after a student, Mohamed Yaghmour, showed a strong interest in research.

Dr Bendriss has assembled a complete team to guide him in this original and unique study in neuromusicology. The team consisted of psychologist Sarah Roach, biostatistics expert Padmakumari Sarada and music teachers Ibrahim Kadar and Zhivka Pesheva from Qatar Music Academy.

Dr Bendriss said: â€œMiddle Eastern music is characterized by the use of additional microtones, resulting in a tonal-spatial system called maqam. These scales have played an important role in healing and medicine since the 10th century in the Middle East, and many theories associate the use of specific maqams with the treatment of specific conditions. Unfortunately, these theories are based only on empirical observations and are not yet supported by a solid body of peer-reviewed studies. For the first time, this study explores the neural correlates of these maqams, giving us a detailed picture of their true effects on brain activity and providing new information on how they might be used therapeutically.

Using sophisticated computer software, the researchers compared the data from the EEG signals and observed that each maqam was characterized by a topographically unique combination of significant EEG changes, suggesting the existence of what they called ” maqam electroencephalographic signatures â€.

The study also provides further support to previous research that linked musical improvisation with increased activity in the left brain hemisphere, particularly low-frequency brain waves in the frontal and temporal areas of the left brain.

The study also supports the observation that musical improvisation is also characterized by increased levels of activity embedded in both brain hemispheres at high frequency signatures.

So far, almost all research in the field of neuromusicology has focused on Western music – it is believed to be the first project to use EEG data to study brain activity while improvising with Arabic maqams. and playing a Middle Eastern instrument, the ney.

WCM-Q student Mohammad Yaghmour contributed to the research under the mentorship of Dr Bendriss. Mohammad said: â€œThis project was extremely exciting to work on as it gave us fascinating insight into human creativity while being the first of its kind study based on musical styles and instruments from the Middle East. Being involved in research at this early stage of my training has been very rewarding.

The researchers found patterns in the EEG data that showed similarities in the perception of maqams with similar intervals. Similar to studies of Western music, a greater incidence of high-frequency brain waves, associated with negative emotions, has been observed in relation to improvisations based on the nahawand, which approaches the minor scale.

Legal warning: MENAFN provides the information “as is” without warranty of any kind. We accept no responsibility for the accuracy, content, images, videos, licenses, completeness, legality or reliability of the information contained in this article. If you have any complaints or copyright issues related to this item, please contact the supplier above.