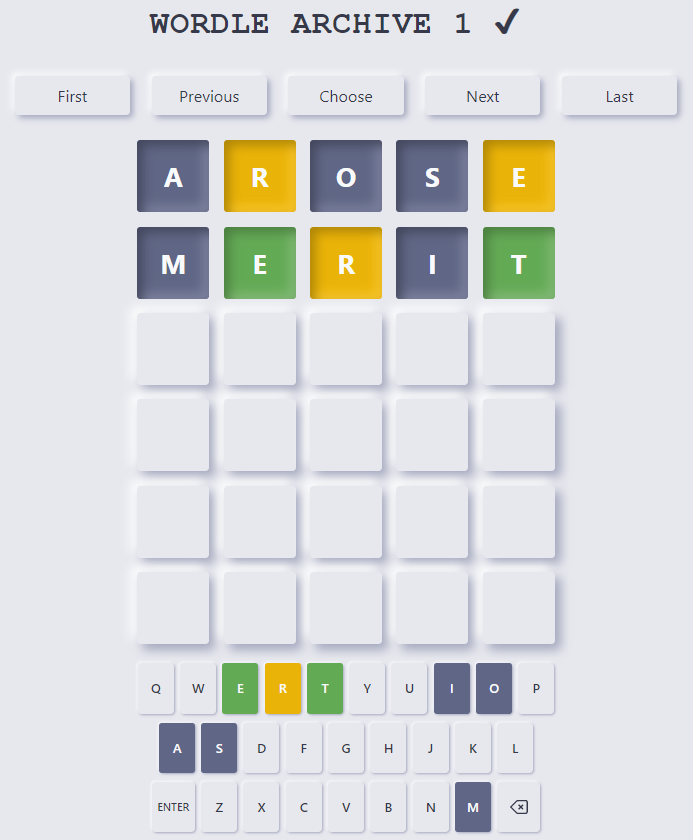 Remembrance of Wordles Past – Research Blog

Writing this story was dangerous. Before, I was only vaguely aware of the existence of wordlea savagely popular online word game created by Josh Wardle and recently acquired by the New York Times. Now I can’t stop playing it. The objective of the game seems deceptively simple: try to guess the right five letter word in six attempts or less.

Thanks to Devang Thakkar, a fourth-year doctoral student in computational biology and bioinformatics at Duke, the more than 200 Wordle games released before I discovered its charms are readily available online. So now I’m making up for lost time.

Thakkar recently spent a weekend creating an archive of all existing Wordle games. You can play them in any order. You can start from the beginning. You can start with Wordle today and work backwards. You can sit down and play eight in a row. Just hypothetically, of course.

Devang Thakkar became addicted to Wordle when his roommate introduced him to it, but he also wanted a way to access the old Wordles. First, he experimented with manually changing the date on his browser to trick the computer into showing him old Wordles. However, his browser gave him an error message if he tried to go back more than fourteen days. To work around this problem, Mr. Thakkar wrote a Python script using a Python Library called Selenium, which allowed it to “rewind as much as you want”.

Thakkar combined his own data with an open-source Wordle project called Word Master created by Katherine Peterson. With an open-source project, Thakkar says, “You put your work there, and then someone else adds to it.”

While WordMaster randomly generates new five-letter words, Thakkar’s archives provide access to “official” Wordle games from the past. Although many Wordle random generators already existed, it was the use of the official Wordle list and the ability to return to a particular Wordle that set this archive apart. Thakkar has also added features such as the ability to share your answers with others and an option for users to access Wordle games in random order.

Thakkar tells me the project was “just for fun”. “I was bored… so I thought, ‘Let’s do something!’ he says. Nevertheless, “it’s basically what I do for my work as well; I write code. In the Dave LabDevang Thakkar uses sequencing data to study the origins of different types of lymphoma.

When not working or creating Wordle archives, Devang Thakkar can often be found in Duke’s Innovation Co-Lab, where he enjoys working with wood and metal. Her projects range from creations meant to be gifts, like a laptop stand and a beer caddy, to her own dining room table. Thakkar says the hobby, being very different from his normal job, helps him maintain work-life balance.

The Wordle project, on the other hand, required coding skills that Thakkar uses on a daily basis. “It’s like work for me, but for fun.” He loves graphic design and board games and has “a special affection for board games with words”.

As for the Wordle archives, Mr. Thakkar says he did not expect them to become so popular. He thought it would mostly be used by his friends, but the archive quickly racked up millions of weekly users. “People keep sending me screenshots of their friends by sending them this website,” he says.

During this time I started noticing Wordle references everywhere. Right after talking to Thakkar about his project, I came across a link to BRDLa delicious Wordle spin-off that uses four-letter birding codes instead of words. By blind chance, I guessed the correct code on my second try: AMGO, Goldfinch. A few days later, I overheard two students talking about the daily Wordle. Clearly, I’m not the only one who got addicted to the game. Luckily for anyone who is, Devang Thakkar’s Wordle Archive, which he dubbed “Remembrance of Wordles Past,” offers unlimited access.

Why does Axess crash when registering for the course?