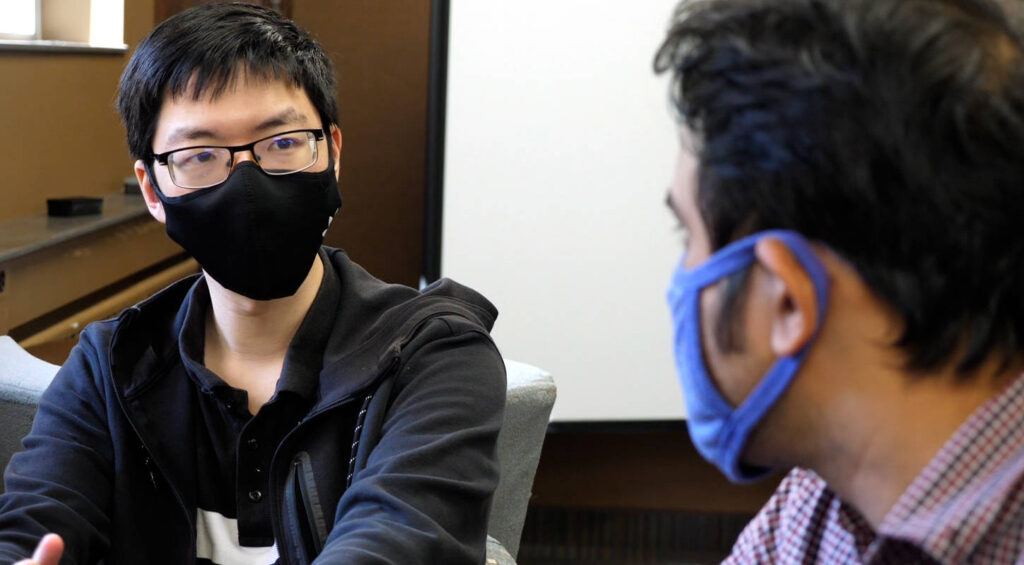 Through his undergraduate research, Nichol He found a way to bring together his passions for IT and healthcare in his future career. After graduating in software engineering, the Blugold hopes to go to medical school while continuing his research in bioinformatics. (Photo by Jesse Yang)

Since the University of Wisconsin-Eau Claire has strong programs in both fields, he decided to take a few courses in each discipline and then decide which path to take.

“I was really into computer science and knew I didn’t want to give up on that,” he says, noting that while his long-standing goal is to be a doctor, the logic of computing, “me really fits. So I decided to do a major in software engineering and a minor in pre-professional health sciences. This way I could experiment with both and decide which one I absolutely want to do.

This summer, through his work on several research projects, he realized that he didn’t have to choose between his two passions, as IT and healthcare intersect in a way that he would never have imagined.

â€œOverall it was a very powerful experience and had a big influence on what I want to do after graduation,â€ he says of his research. â€œWhen I entered college, my hopes were to go to medical school and become a doctor or graduate and be a computer scientist. I thought I should give up one of them. I never thought that my computer science and medical interests would one day intersect.

â€œNow, through my research, I discovered bioinformatics, which is really a combination of my two passions. I really like the intersection between software engineering / computer science and biology / medical field.

So his future plans now include going to medical school and majoring in radiology, as well as continuing his research in bioinformatics during his postgraduate studies and / or after he becomes a doctor.

This summer, he worked alongside two research mentor professors, one in biology and the other in computer science.

â€œThe two research projects are very different; they’re almost completely opposite, â€says He, from Medina, Minnesota. â€œOne really observes the behaviors of fish and works with animals and the other works with data and programs. They were completely different, but together they really gave me a rewarding experience.

Through his research with Gomes, he began to understand the powerful intersection between computer science and the natural sciences.

Together with researchers at North Dakota State University, He and Gomes explored markers of methylation, which are certain values â€‹â€‹associated with gene expression that may be related and could be a predictor of pancreatic cancer.

â€œSo the deep learning I’m doing on this project is looking at all of this data and predicting whether a person may have pancreatic tumors or whether they are healthy,â€ he says.

Gomes and He are also working with Mayo Clinic Health System on a project that uses CT scans and data to help predict outcomes for pancreatic cancer patients who are treated with chemotherapy.

â€œMy research over the summer was a unique experience for me because I was working in a real work environment,â€ he says. â€œAnd it showed me that I really wanted to explore deeper learning in bioinformatics more.

â€œI went into this research without knowing anything about deep learning or bioinformatics. But I found that passion for it and it’s really, really cool.

The field of bioinformatics grew out of the need to organize and analyze the growing amounts of biological data – including data essential to the advancement of healthcare – being generated. Bioinformatics analyzes are increasingly needed to answer many biological questions.

â€œThe need for bioinformatics is now greater than ever,â€ says Gomes. â€œAs modern technology allows us to collect more and more clinical and biological data, we need experts who are not only able to process the data to obtain information, but do so in the most optimized way to enable faster and more precise response. “

A new major in bioinformatics – an interdisciplinary program that draws on the expertise of the university’s biology, computer science and mathematics departments – will be available at UW-Eau Claire from fall 2022. It will be the only bioinformatics program of its kind in the UW system. .

Gomes describes him as an outstanding student and researcher, who made valuable contributions to their research despite having no previous experience in deep learning or bioinformatics.

â€œNichol is very insightful about the challenges while developing a deep learning model and how we can overcome them,â€ Gomes said. â€œDuring the pancreatic cancer research project with the Mayo Clinic, he introduced and implemented a patch-based deep learning model to split CT scans into 3D patches, which makes model training more achievable on our GPU nodes at the Blugold Center for High-Performance Computing.

â€œThe fact that Nichol can gather information and also engage in discussions to modify or improve the proposed workflow is simply amazing considering he is an undergraduate student and has no previous experience. prior in-depth learning. “

He came to UW-Eau Claire primarily because of the many internship and research opportunities he knew to find as a Blugold.

Among the opportunities he values â€‹â€‹most is the Karlgaard Fellow, a scholarship program that, among other things, supports undergraduate research students studying computer science or software engineering.

Karlgaard Fellows collaborate with professors of computer science on research and produce scholarly publications and / or formal presentations outside of the UW-Eau Claire campus.

â€œI was lucky enough to be chosen for this scholarship, and it was a great motivation for me to explore different areas of IT,â€ he says. “Knowing that there is someone out there who supports me financially motivates me to work harder, but it also makes me even more grateful for the opportunities.”

David and Marilyn Karlgaard met when they were both students at UW-Eau Claire. David Karlgaard obtained degrees in mathematics and physics in 1967. He was co-founder, CEO and President of PEC Solutions Inc., an Internet technology consulting company, which was acquired by Nortel Networks in 2005. Marilyn Karlgaard, who attended UW-Eau Claire from 1965 to 1968 , is a retired human resource. director.

The Karlgaards have made substantial donations to the UW-Eau Claire Foundation, donations that support several scholarships and various other university initiatives.

He says the scholarship program’s links to undergraduate research are particularly significant because computer science majors often enter the program with a clear idea of â€‹â€‹what they want to do with their degree. Research can help them uncover career paths they may not have considered or experienced.

â€œIt’s a very large field and a very fun field, so students have to look around and find the niche that is right for them,â€ he says of computer science and software engineering. â€œIt was being a Karlgaard scholarship holder that brought me into this bioinformatics research. Without it, I wouldn’t even know what I want to do in the future.

Women are encouraged to learn programming on Pioneer Day Lovelace