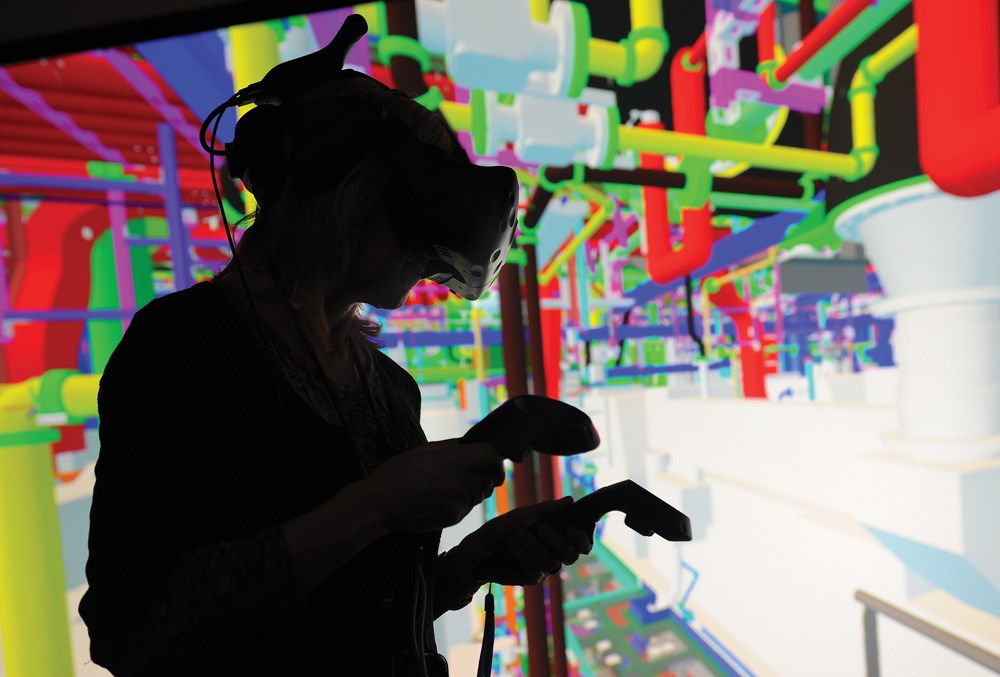 Under the deckhouse on the after deck of the federal government’s new oceanographic vessel, I orient myself by walking carefully between the yellow-painted cranes. Beyond the ship’s railings, the horizon where the ocean meets the sky stretches out.

Moving around inside the ship, I make a brief stop on deck, standing at one of the rows of instrument consoles and observing the sight lines from the large windows. Soon, however, I am at the heart of the ship, on a narrow gangway in the engine room, where a dizzying array of cable trays, electrical systems, and water pipes winds overhead.

The most striking aspect of the tour today, however, is that it takes place on a ship that has yet to be built.

Instead, it’s happening in a virtual reality environment, via both a large-screen 3D immersive experience and a VR headset that’s built into Seaspan’s new HoloShip platform.

The platform, by visualization company Virtalis, was customized for Seaspan and installed in a dedicated space at Seaspan’s North Vancouver headquarters late last year. This allows ship designers to test how components fit together and get a much more detailed idea of ​​how a specific feature works long before any steel is cut, said innovation manager Jennifer Busler. at Seaspan.

“There are a lot of parts to putting the ship together that can be very complicated,” Busler said.

Issues such as the assessment of lines of sight, the accessibility of certain areas of a vessel, and the layout of equipment, in particular, lend themselves to digital testing in advance, she added: if a particular bridge is wide enough or if a member of the bridge crew can see well enough around the equipment when docking or navigating in ice-filled waters.

At later stages in the vessel’s life, the system can also be used to guide training, repairs and maintenance.

The space for the 3D cinema room was created by removing some meeting rooms, needed to house both the theater and the projector system and behind the systems hardware that sits behind the giant screen.

So far, reaction to the visualization system has been positive, Busler said, especially among younger employees. “I find that people who have a lot of gaming experience are very comfortable. They understand the rules of working in a virtual environment.”

Even for those who aren’t as adept at VR, “Walking through this ship is far more meaningful than just having read the reports or looked at the engineering hardware,” she said.

While the use of 3D visualizations isn’t new to many industries, especially manufacturing, it’s still relatively uncommon in the marine industry, Busler added.

Currently, the HoloShip program has been used to refine the designs for the oceanographic vessel that Seaspan is building for the Coast Guard. The program is also used in the design process for additional federal ships, including the Polar Icebreaker and a series of general-purpose ships.

The oceanographic vessel, which will support scientific research missions including oceanographic, geological and hydrographic surveys, is currently under construction at Seaspan along with the first of two Royal Canadian Navy Joint Support Ships. The project, which has suffered several delays, currently has a budget of $966.5 million.