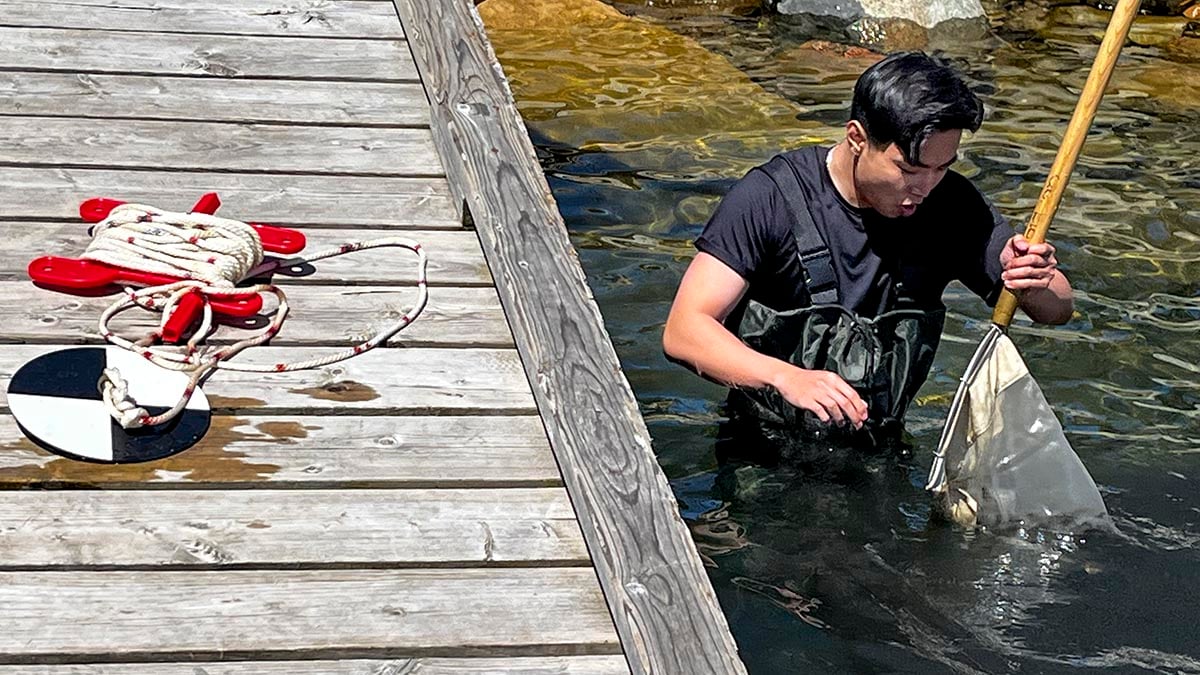 SHEGUIANDAH—Dawn Bazely first came to Manitoulin on an ecology field trip when she was in grade 12 in 1979. She was working on a cattail research project, measuring quadrants of plants at the edge of a beaver pond, when she came face to face with an adult beaver. It was then that she decided to be a field ecologist.

She then obtained a master’s degree and an undergraduate degree at the University of Toronto, in biogeography and botany, before working in the field of Hudson’s Bay from 1980 to 1984. She completed a doctorate at the University of Oxford in the UK and returned to Canada to become a professor at York University in 1990.

Professor Bazely decided to locate her course in Manitoulin, at the Lake Huron Fisheries Research Station in South Baymouth. “It was field methods in plant ecology,” she said. She was delighted to view a newly rediscovered file folder that contained lecture notes, student handouts, schedules, and her own handwritten list of plants from that initial field course. There was even a copy of a letter she wrote in 1993 to the Rainbow County Tourism Association and carbon copied to The Manitoulin Expositor about what they were doing. She directed this course from 1990 to 1993; the following year she had a baby.

She resurrected the field course this year. “Honestly, if you had asked in 2019 or 2020 if I would resurrect a field course like this, the answer would have been no,” she laughed.

“I don’t know why we are here,” she said. “I think it was here last fall. I just needed to get out of Toronto. Manitoulin is such a calming place, I would say. I have loved him for about 40 years. It’s where I decided I wanted to have the career I had, so I think in a way I’m giving back to Manitoulin.

Eight students participated in the course, which lasted two weeks from May 2 to 13. They came from York and other Ontario universities: Trent, Brock, Guelph and Toronto Metropolitan (formerly Ryerson). They were based in Sheguiandah this time around, with accommodations at the Paradise Motel and a classroom and lab set up at Sheguiandah Hall.

Prof. Bazely taught this course in the field virtually (with the help of her friend and colleague, Dr. Shoshanah Jacobs from the University of Guelph), using home science kits she developed, due of the pandemic. “York students have been particularly affected,” she said. “Our population in York is made up of recent immigrants, low-income and multi-generational families working in Amazon’s call centers. They are highly racialized and have been hit very hard by COVID. From the start, it was for the children in my classes.

No one could leave their homes, she added. ‘You couldn’t even have a field course where students went to the streets because the lockdown was your property lines.’

Wondering where she could safely go in Ontario, she remembered Manitoulin Island and everything fell into place. Professor Bazely highlighted how the community came together to make this happen. “The infrastructure needed for these field courses is monstrous,” she said.

There were accommodations to be provided, meals and access to areas to conduct field research. “You have to find a place to set up your classroom, your laboratory,” she added. They couldn’t afford a bus: no one had worked for two years, so they had to be somewhere where they could easily walk to the field. Sheguiandah Hall was accessible to the bay, Paradise Motel and Green Acres.

“I got the room and, more importantly, from an ecological point of view, it’s part of the Precambrian shield,” Prof Bazely noted. “It’s the only place on Manitoulin where the north shore is outcropping. The rest is escarpment, Paleozoic, so I knew we had this cool geology.

She brought the traditional course in ecology: identify trees, learn more about frogs, and she also brought in other scientists. Andrew Tanentzap, a leading microplastics researcher, was one of them. He was a graduate student of Professor Bazely and is now Professor of Global Change and Ecology and Head of the EcoSystems and Global Change Group at the University of Cambridge.

“He just published one of the most important research papers (on microplastics),” she said. “You have one of the world’s pioneering scientists right here at Manitoulin.

Dr. Joe Shorthouse, a retired Laurentian University entomologist and occasional contributor to this article, spent a day teaching students about bugs and bugs. Another associate led the students on a field trip to study turtles and frogs in their habitat.

There was a day spent with the Little Current Fish and Game Club and Manitoulin Streams in Bass Creek, and an Indigenous Knowledge Day where they visited the Ojibwe Cultural Foundation and Lillian’s in M’Chigeeng.

When this reporter visited the group at Sheguiandah Hall, it was a hive of activity. Students were completing their homework inside the room and preparing materials for data collection at Sheguiandah Bay. Professor Bazely jostled between the group of students and the car, getting the students out and making sure the equipment and lunches were all packed and loaded.

“These students have never been outside or done anything like that,” Tanentzap said. “They are COVID children. This is the first time they have done outdoor fieldwork in their entire degree. They are in their third (or fourth) year of university. Everything was done through computer screens.

Skye Vasey has just completed her third year of Environmental Science/Studies at Trent University. He came to the field due to the previous two years being online. “It’s really hard to get experience on the pitch,” he says. He hopes to make enough connections during his undergraduate studies to be able to find work in a study when he is finished.

Emily Whitehead was the youngest of the group. She is entering her third year of biology at Metropolitan University of Toronto and hopes to major in environmental science. She came to the field to gain practical experience. “I did the lab stuff and the clinic stuff,” she says. “It’s just not for me. I wanted to try the on-court experience and it’s been really great and it’s solidified, which is what I want to do.

Most of the students are from the Greater Toronto Area, including Ms. Whitehead. “It was nice to see the environment and the culture change, to come to a place like Manitoulin. I think this is a very important area for environmental work.

Several international students also participated. Dama Chowdhary, from Bangladesh, is a fourth-year student at York University majoring in environmental and life sciences. It was his first opportunity to explore another part of Ontario. “It’s definitely a nicer prospect to see, to experience, and to be able to use the knowledge that we’ve learned mostly from books and lectures,” she said. “It’s an opportunity to look at the culture and (the sense of) community and how everyone comes together when there’s a problem, for example at the hatchery.”

Nandini Patel is from India. She is also a fourth-year student at York. She enrolled in this field course because she needed field experience for her degree and to learn what she wants to do and what she excels at. “We need to know what our downsides are, where we’re missing out, so this field course is pretty good,” she said. “I think it’s hard in the city to experience some of the things that we’ve experienced here, like unity and so much culture.”

“I think the story is that you can be from anywhere in Canada and become a professor at Cambridge University,” Professor Bazely said. “We have what it takes. As long as we share this with students, we can prepare them to be good citizens in the world, not only on the environmental front but also on the social justice front.