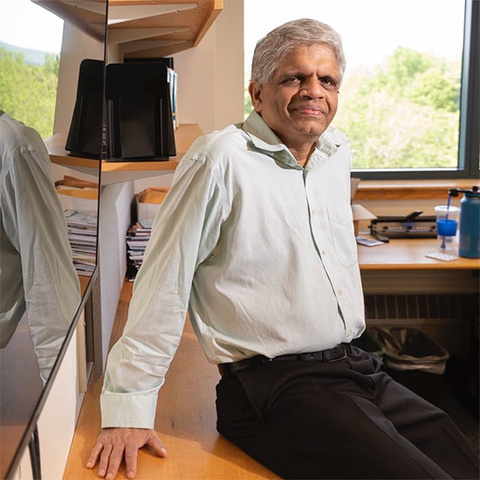 Professor Emeritus Ramesh Sitaraman from the Manning College of Information and Computer Sciences (CICS) at UMass Amherst is the recipient of a 2022 Amazon Research Award (ARA), which will fund his research into adaptive bitrate (ABR) algorithms for video streaming.

His winning project, “Design and Evaluation of ABR Algorithms for High-Performance Video Delivery,” is a collaboration with CICS Assistant Professor Mohammad Hajiesmaili, an online optimization expert. The project will address new challenges for ABR algorithms that maximize the quality of video user experience by dynamically adapting the video stream to match variations in Internet connectivity.

For example, if a user is playing a video on a mobile device and wanders into an area with poor network connectivity, the ABR algorithm will use sophisticated techniques to quickly reduce the video quality to prevent the video player from freezing.

The ABR algorithm previously developed by Sitaraman’s team, BOLA (Buffer Occupancy-based Lyapunov Algorithm), is state-of-the-art and is now part of the reference MPEG-DASH video player standard that enables media streaming on the Internet. BOLA and its variants are widely used in the field for commercial video streaming by major video providers such as Orange, BBC, CBS and Amazon Prime Video.

With Hajiesmaili, Sitaraman aims to address the challenge of low latency live streaming. “Imagine watching a Super Bowl live stream, and there’s a typical twenty-second lag between when a touchdown is scored and when you see it on your device,” says Sitaraman. “Meanwhile, your neighbors who are following the game on air, radio or social media are cheering. You know something has happened, but you have no idea what is happening. We We can solve this perennial problem with low latency live streaming that can deliver a live event to a large audience with only a few seconds lag.

A member of the Association for Computing Machinery (ACM) and the IEEE, Sitaraman is known for his pioneering work in the content delivery networks and edge computing services that currently provide much of the world’s web content, streaming videos and advanced applications. He is the recipient of the first ACM SIGCOMM Networking Systems Award for his work on Akamai’s CDN, a DASH Excellence Award for his work on ABR algorithms, and a UMass Amherst Distinguished Teaching Award. Sitaraman is also founding director of the CICS Computer Science Program and currently directs the Internet-Scale Distributed Systems Laboratory. He holds a doctorate in computer science from Princeton University.

Computer science is now the fastest growing subject, according to new data