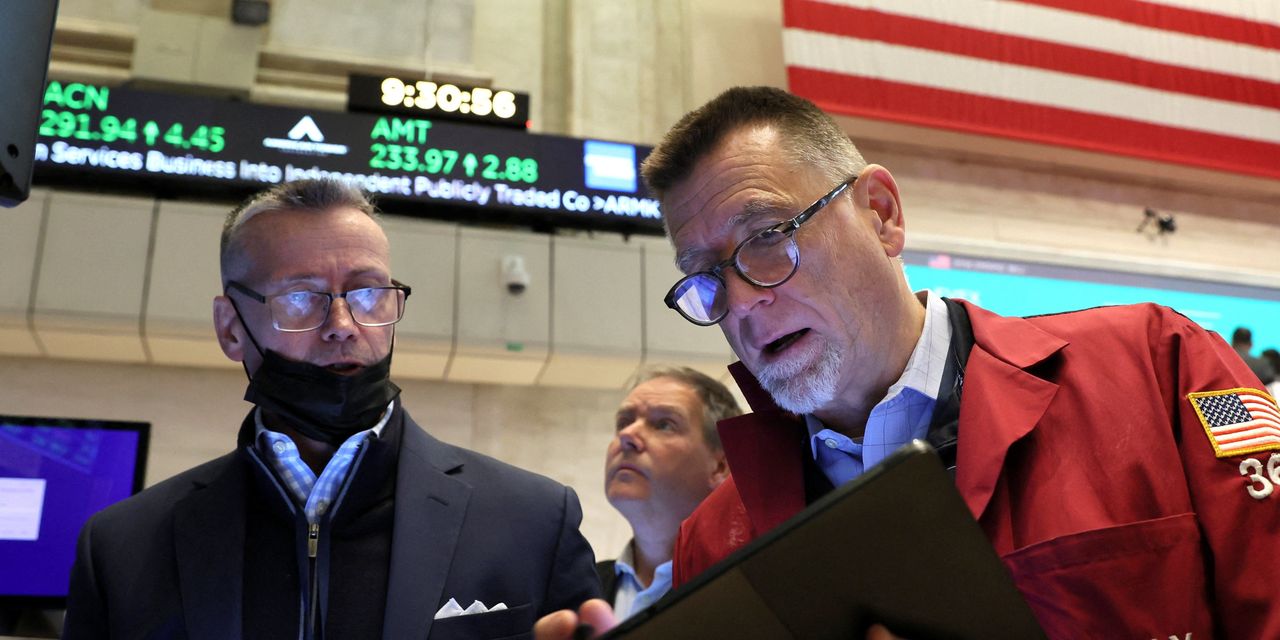 The Dow Jones Industrial Average fell for the fifth day in a row, the Nasdaq Composite lost 3.2% and bitcoin fell 8.5%.

Markets entered 2022 on a multi-year winning streak, but persistent inflation and the prospect of a sustained cycle of interest rate hikes have shaken what was strong investor sentiment.

The day offered no relief for anxious stock investors, who are bracing for the Fed to withdraw more of its economic support.

Trade was bumpy. The S&P 500 fell in the afternoon after spending much of the morning in the green, and its losses deepened as the closing bell approached. There is a long way to go before rising prices get back under control, investors and analysts have warned, bringing volatility as financial conditions continue to tighten.

“The band-aid is still slowly coming off,” said Michael Farr, managing director of investment consultancy Farr, Miller & Washington. “According to the Fed, we are not near the end of this process that everyone wants to end.”

The consumer price index rose 8.3% in April from the same month a year ago, data showed Wednesday morning, decelerating from an annual rate of 8.5% in March but higher than the 8.1% expected by economists. The decline in annual inflation last month marks the first monthly easing in price increases since August 2021.

Volatile markets were primed to react strongly to any headline hinting at lingering price pressures, said David Kotok, chief investment officer at Cumberland Advisors. “We’re in these kind of crazy times,” he said.

Inflation data has caused short-term and long-term government bond yields to converge, which investors say signals concerns about monetary policy tightening and growth. The yield on the two-year Treasury – highly sensitive to expected Fed tightening – rose to 2.629% from 2.623% in Tuesday’s settlement. The 10-year Treasury yield, meanwhile, fell to 2.918% from 2.990% a day earlier. Bond yields fall as prices rise.

Riskier assets continued to suffer. Niche pharmaceutical companies were among the biggest losers on the Nasdaq on the day, with big tech companies such as Netflix and parent meta-platforms Facebook both falling more than 4%. In the unpredictable world of cryptocurrency, bitcoin fell to its lowest level at 5 p.m. ET since December 2020 and continued to trade more than 50% off its all-time highs from last year.

“Bubble-like stocks will continue to unfold and we are watching bitcoin closely,” said Chris Senyek, chief investment strategist at Wolfe Research. Market losses in areas like these – which have attracted crowds of retail investors over the past two years – could reduce spending in the real economy, he warned.

More speculative bets like investing in growth-oriented stocks and crypto have come under fire this year. Higher interest rates set by the Fed translate into higher returns on safe assets, dampening the allure of distant earnings. Last week the central bank raised rates by half a percentage point, the biggest hike since 2000, and approved a plan to reduce its asset portfolio by $9 trillion, moving to the its campaign to keep inflation at a 40-year high has moved up a gear.

The war in Ukraine, which has propelled inflation even higher by driving up commodity prices, and the Covid-19 lockdowns in China that threaten to damage the global economy, add uncertainty for investors. .

“If we only had policy rates up, or only high inflation, or only China or only Ukraine, we could probably handle that,” said Daniel Morris, chief market strategist at BNP Paribas Asset. Management. “But we have all of that simultaneously. This is why it is a particularly difficult environment.

Aoifinn Devitt, chief investment officer at Investment Advisory Moneta, said she guides clients towards investments rooted in the real economy, such as in the energy and infrastructure sectors, because of the relative strength of these sectors. against inflation. The sell-off in tech stocks, she noted, has been “blind”.

“It’s probably a sign of fear that has entered the retail investor complex,” Ms. Devitt said.

The riskiest corners of the market received little comfort on Wednesday. Bitcoin’s recent selloff and a bearish quarterly report on Tuesday contributed to Coinbase Global’s decline. Its shares fell $19.27, or 26%, to $53.72 after the cryptocurrency exchange said its users were down from the previous quarter. Unity Software shares plunged $17.83, or 37%, to $30.30 after the video game software developer said its loss had widened and gave a revenue forecast for the second quarter below analysts’ expectations.

Kohl’s stock fell $2.74, or 5.6%, to $46.65 as shareholders rejected pressure from an activist investor to replace up to 10 directors as the retailer considers a sale potential. Switch rose $2.79, or 9.1%, to $33.54 after the IT services company said it was being taken private by a consortium of investors.

On the other hand, strong earnings reports from some companies led to gains. Electronic Arts shares rose $8.89, or 8%, to $120.49 after the video game company said last fiscal year revenue rose 24% to $6.99 billion of dollars. Donut chain Krispy Kreme rose 46 cents, or 3.8%, to $12.67 after reporting earlier on Wednesday that net revenue jumped 16% year-over-year during for the three months ending March.

Get a better understanding of Azure with this course bundle