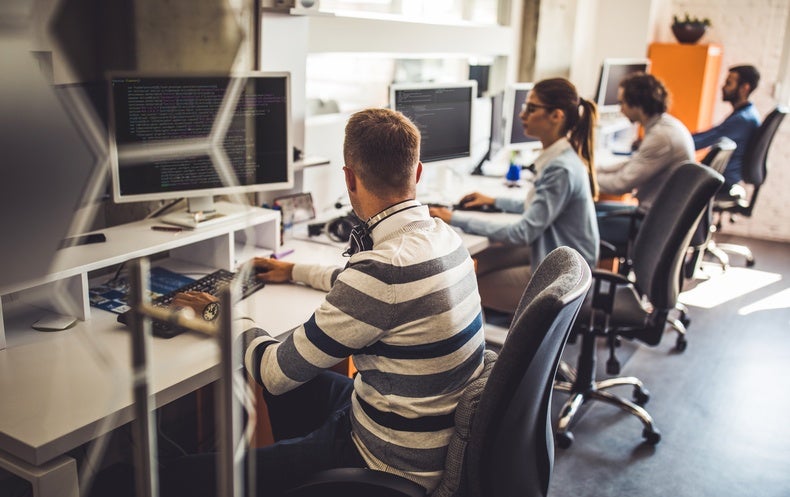 There are too few women in computer science and engineering

In the United States, only 20% of undergraduate computer science degrees and 22% of engineering degrees are awarded to women. Women are deprived of flexible, lucrative and high-level careers. The company is also missing out on potential contributions they would make to these areas, such as designing smartphone chatbots that suggest help not only for heart attack symptoms, but also for indicators of domestic violence.

Identifying the factors behind the under-representation of women is the first step towards remedies. Why are so few women entering these fields? A common explanation is that women are less interested than men in computing and engineering. This explanation is technically accurate and supported by the women’s and men’s own responses. But, it is problematically incomplete and exacerbates the very disparities it seeks to explain.

Ending with an explanation that women currently have less interest in these areas is shortsighted. A better solution is to understand how the cultures of these fields deter many women and girls from taking an interest in this important work. Focusing the explanation on currently existing interests suggests that girls and women are deficient and need to change. Instead, we believe changing the masculine image and cultures of engineering and computing will attract more young women to these fields. The status quo clearly shows that these societal domains and institutions still have a long way to go.

In an article we recently published, we found that young children and teenagers in the United States, like adults, believe that girls are less interested than boys in computer science and engineering. Girls who strongly subscribe to these stereotypes show the least interest in computer science and engineering. How do these gender stereotypes thus become self-fulfilling prophecies?

Two subsequent experiments in this article revealed the underlying causal mechanisms. We found that girls’ choices are negatively influenced by stereotypes that other girls are not interested in these areas. Describing a computer activity as something that “girls are less interested in than boys” made girls feel less of a sense of belonging to the activity and made them much less likely to choose it. When computing activity was not marked by a gender stereotype, girls and boys were equally interested in it.

When girls hear the message “people like you (i.e. other girls) don’t like it,” they assume they won’t be interested in the activity, and it changes their behavior. In this way, noting differences in interests without giving the broader context of why these differences exist can in itself contribute to the under-representation of girls.

A fuller explanation for girls’ and women’s lower interest is to highlight societal and structural influences, such as the masculine images and culture of these domains. The images students have in their heads of computer science and engineering are important. When asked to describe computer scientists, American college students often think of images like those from TV shows like The Big Bang Theory and Silicon Valley. They mostly imagine white and sometimes Asian male geniuses who are socially awkward, play video games, and enjoy science fiction.

Experiments we conducted with middle and high school students show that these images can have profound effects. We compared young women’s interest in taking a computer class when a highly stereotypical image versus a less stereotypical image is salient in the classroom (for example, when Star Trek versus nature posters are displayed). Many young women express more interest in pursuing computer studies when their class does not reflect current stereotypes. Men and boys, on the other hand, do not alter their interest as strongly in response to these two images.

Of course, many computer scientists and engineers don’t fit the stereotypical images. Many are socially skilled with a wide range of interests and hobbies. Yet until current images become more diverse, we may continue to see more women than men feeling like they don’t belong in these areas.

Beyond student perceptions, the actual male culture of computing and engineering also contributes to the underrepresentation of women. In our research, we document that computer science and engineering have “masculine flaws”. They are characteristics that reward or standardize the characteristics and behaviors generally associated with being male. Examples include rewarding aggression, overconfidence, and self-promotion.

At Google, women were promoted less often than equally qualified men. Google realized it was because in order to get promoted, you had to set yourself up for a promotion. This policy was biased because women in the United States tend to be socialized not to promote themselves and may even receive social and economic backlash when they do. Other examples of these masculine flaws in computer science and engineering include masculine words such as “dominant” and “competitive” in job postings; policies that do not compensate for service and emotional labor, which are tasks that often fall to women; and provide networking opportunities for those who participate in sports associated with men, such as kitesurfing. Masculine flaws can also be difficult for many men and people who identify as non-binary, as they force people to fit into a narrow mold.

Recognizing the current gender disparities in interests is just the beginning. We must also take into account the historical and contextual reasons Why these current gender disparities exist. We should take the blame away from women and girls for their current disinterest and instead focus on what society can do to create more welcoming cultures for women and girls. Today’s computer stereotypes became pervasive in the United States during the PC revolution. Previously, women earned a significantly higher proportion of undergraduate computer science degrees (37% in 1984) than they do today.

Today, more women are pursuing IT careers in countries where the image of IT is less masculine, such as Malaysia and Armenia. Other strategies to improve IT and engineering cultures could be to balance masculine flaws in tech companies by raising standards and traits that are not stereotypically masculine. For example, companies could reward mentorship and collective achievement. Universities could revamp their computer science curriculum to be more inclusive like Harvey Mudd College. Harvey Mudd established more inviting pathways into computer science by creating a separate entry into the major for students with no prior programming experience, instead of only rewarding those with pre-college experience.

Creating more welcoming cultures is a systemic issue that is the responsibility of the tech industry and society at large. The key is to change the narrative that attributes gender disparities to the inferior interests of girls and women. Instead, we need to articulate the role that the perceived and actual cultures of these domains play in creating these patterns. Until we change the narrative that the lower interests of girls are to blame, it will be difficult to make technology more representative and inclusive of all of our population.

This is an opinion and analytical article, and the opinions expressed by the author or authors are not necessarily those of American scientist.