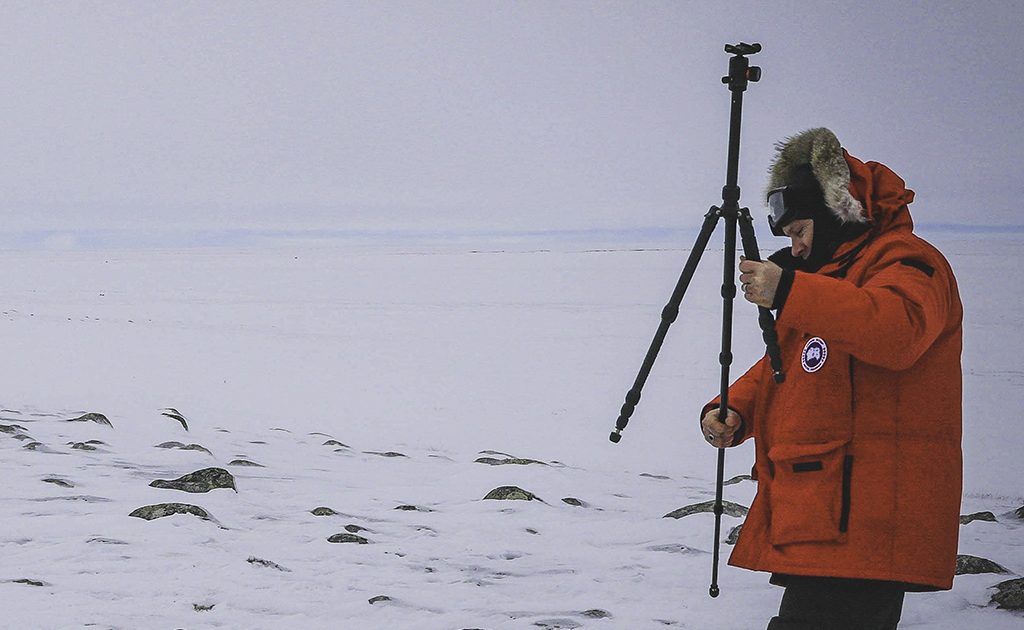 UND was named part of a $17 million cold weather research project in collaboration with three other universities and the US Army Corps of Engineers Cold Regions Research and Engineering Laboratory.

Over the next four years, UND will work alongside the University of Minnesota, Virginia Tech and Stonybrook University to conduct Arctic research and develop the Extreme Cold Defense Resilience Platform .

With With the goal of improving the superiority and effectiveness of the U.S. military in extreme cold environments, the UND role will bring together multiple North Dakota-based resources and collaborations to create the project’s Cyber ​​Infrastructure Center .

UND’s share of the grant is just over $4 million, making it one of the largest in the history of the College of Arts & Sciences.

Sometimes it pays to live in North Dakota, a place where many people feel comfortable working in winter temperatures that can drop as low as 25 or 30 degrees below zero. This is one of those times.

The University of North Dakota has been named part of a $17 million cold weather research effort in conjunction with three other universities and the U.S. Army’s Cold Regions Research and Engineering Laboratory. Corps of Engineers (CRREL).

UND’s share of the grant is just over $4 million, making it one of the largest in the history of the College of Arts & Sciences. With the goal of improving the superiority and effectiveness of the U.S. military in extreme cold environments, the UND role will bring together multiple North Dakota-based resources and collaborations to create the project’s Cyberinfrastructure Center, a said Timothy J. Pasch, professor of communication, Arctic researcher and UND principal investigator on the project.

UND duties include conducting field research in the air and on the ground in some of the most remote and inaccessible areas of the Alaskan Arctic wilderness. This data will be analyzed through cutting-edge collaborative research in data visualization, advanced modeling and predictive analytics.

“One of the most exciting parts of this research is how collaborative it is,” Pasch said. In addition to leadership from CRREL and Virginia Tech, as well as collaboration with Stonybrook and the U of M, this initiative brings together several groups at UND, including the Communications Department of the College of Arts and Sciences, the artificial intelligence/virtual reality lab at the Chester Fritz Library. , the UND Automated Systems Research Institute, the School of Electrical Engineering and Computer Science, and the UND Artificial Intelligence Research Initiative, among other teams.

“We are also excited to work together on digital innovation with the University of California at the National Center for Ecological Analysis and Synthesis in Santa Barbara, which operates the DataONE Foundation and the Arctic Data Center for the US National Science Foundation,” Pasch continued. .

UND research and technology innovation will help CRREL better understand changes in Alaska’s permafrost – the frozen layer of rock and soil that covers a significant amount of land above the Arctic Circle. As areas of the Arctic thaw, the resulting terrain changes can cause significant damage to infrastructure and create new security risks for the U.S. military in an already extreme environment.

“Our team works with some of the most dynamic researchers in the world to collect, map, analyze and visualize current and future Arctic terrain conditions with a high degree of accuracy, as well as to develop the data platform integrating learning machine to automate these processes,” Pasch said.

Many UND graduate and undergraduate students will participate in this research over the next four years. Student researchers will test different stages of the Defense Resilience Platform, help develop the systems’ artificial intelligence protocols, collect field data, and perform many other tasks.

Some of the undergraduates helping the team are cadets from the UND Army ROTC Battalion, under Colonel Jason R. Mathre, a professor of military science.

“This is an incredible opportunity for Army ROTC to collaborate on a project that will have significant positive impacts on soldiers of the future,” Mathre said. “Cadets are eager to provide feedback on technology and equipment that will help influence the effectiveness of cold weather research. »

Students and faculty will contribute several high-impact journal articles to be published in the fields of communication, AI, engineering, geospatial data, and computer science, among others.

“I offer my congratulations to Dr. Pasch and the team for this award and a huge thank you to all those who have contributed to the achievement of this goal, both inside and outside the UND”, said John Mihelich, acting vice president for research and economic development.

“The project exemplifies the strengthening of interdisciplinary and collaborative research excellence across the University, as well as our growing research with the Department of Defense aligned with the UND National Security Grand Challenge.

“It is important to note that research provides many graduate and undergraduate students with hands-on research experience. I look forward to the outstanding work of the research team during this project.

As for what lies ahead, including working in remote environments and developing state-of-the-art software, UND researchers are uniquely prepared to meet the challenges of the project, said Bradley Rundquist, dean of the College of Arts. & Science.

“Being resilient and even thriving in cold weather is something we have a lot of experience with here at UND,” Rundquist said. “With our real-world experience in extreme weather conditions, combined with Dr. Pasch’s long experience of research in arctic regions and on-campus partnerships, this collaboration allows us to apply our expertise to create sophisticated solutions for the defense industry.

Jeff Weatherly, associate dean of the College of Arts & Sciences, agreed. “We are very proud to be part of the collaborative group that seeks to help the Department of Defense,” he said. “Staying at the forefront of communications technology is a vital need for the country, and I’m pleased that our expert faculty is contributing to that goal.”

The team would like to acknowledge the support of John Hoeven and Kevin Cramer, US Senators from North Dakota; Bradley Rundquist, Becky Lucke and the Dean’s Office of the College of Arts and Sciences; John Mihelich, Michael Sadler and the Research and Economic Development Division; Rebecca Snell, Grants and Contracts Manager; Ryan Adams, director of the School of Electrical Engineering and Computer Science; Naima Kaabouch, director of the Artificial Intelligence Research Initiative; and the Autonomous Systems Research Institute.

Online Course in Drug Development: The Key to Success, From Concept to Commercialization – October 17-18, 2022 – ResearchAndMarkets.com