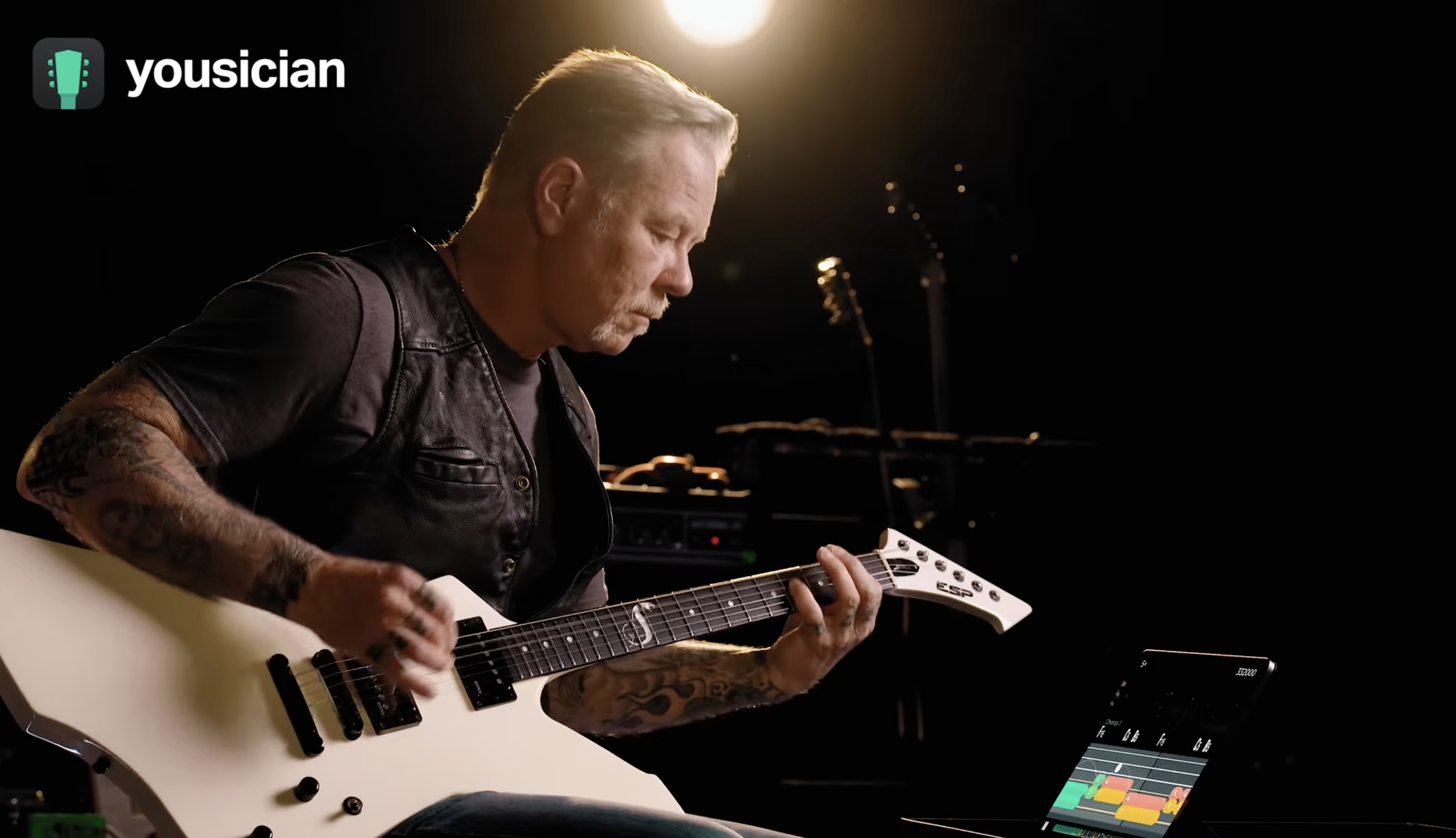 Just like Eddie Munson in stranger things 4, Metallica’s “Master of Puppets” is, to me, “the most metal of all time”. I spent my teenage years obsessively learning the guitar, and Metallica was one of my biggest influences. The combination of vocalist and rhythm guitarist James Hetfield’s thrash riffs and progressive song structures with lead guitarist Kirk Hammett’s shredding gave me plenty to try and master. I was never fast enough or accurate enough to completely nail Metallica’s hardest songs, but I could make a pretty decent impression when I was on my set.

Over 20 years later, I’m decidedly not on my game, having only played sporadically for the past decade. I tried to get back to playing in spurts, but nothing really stuck. Just recently, however, Finnish company Yousician popped up on my radar thanks to a collaboration with – who else? — Metallica.

At a high level, Yousician software listens to your guitar playing and matches it to the lesson or song you’re trying to play, giving you a higher score based on your accuracy. The app offers lessons and songs for guitar, piano, bass, ukulele, and vocals, but my time was only spent on the guitar section.

For people who have never played before, there are plenty of introductory lessons – but the most interesting thing about Yousician for someone like me are the transcriptions of the songs. The app is loaded with tons of popular songs that have, in my limited testing, fairly accurate transcriptions that help you learn to play along with the original recording. Queuing a song brings up a continuously scrolling tab overview of the song; play with it and Yousician will try to tell you if you hit a chord just in time, if you’re a little ahead or behind, or if you missed it completely.

From what I can tell, the vast majority of the music on Yousician was recorded by session musicians – so you’re not playing over the original Nirvana or Foo Fighters tracks, but a well-recorded reproduction, although a bit soulless. That’s okay, because these exercises work well enough to learn a song, then you can just play along with the original once you’ve perfected it.

But Metallica’s journey is different and much more compelling. Yousician got access to the master recording of 10 of the band’s songs, which means you learn and play along with the original songs you (presumably) love.

However, the Metallica part of Yousician is not limited to learning specific songs. There are three courses to play: Riff Life, Rock in Rhythm and Take the Lead, each delving into a different aspect of the band’s music. Each of these courses, in turn, has a handful of lessons focused on a song and the skills needed to play it. There are also videos featuring band members talking about the overall concept. Although James and Kirk don’t literally teach you the songs, it’s always great to see them play up close and personal and to hear how they approach songwriting and performance.

For example, the “Rock in Rhythm” course has a whole section on downpicking, a more punchy and aggressive way of using your picking hand that has come to define much of Metallica riffing and heavy metal music. in general. Watching James Hetfield perform some of his most intricate and fastest riffs in great detail is an absolute treat.

Mixed in with these videos are lessons that focus on a specific part of a song. The Riff Life course starts out extremely simple, with key riffs from songs like “For Whom the Bell Tolls”, “Nothing Else Matters”, and “Enter Sandman”. These lessons follow a fairly standard format. First, you’ll listen to the guitar part in isolation to get it in your head, sometimes accompanied by a Yousician instructor showing you how to approach the song. After that, you play the part in the context of the song, starting slowly then gradually speeding up until playing it at full speed. Then, to end the lesson, you perform the full song.

For this last option, Yousician offers several ways forward. If you’re a beginner, you can play simplified versions of the song, but Yousician also includes full versions of the rhythm guitar track or a combo of the rhythm and lead parts. If you’re just learning the song for the first time, you won’t want to jump straight into these versions. But if you’re up for the challenge, the practice mode helpfully divides the song into sections like intro, verse, chorus, solo, and more. You can slow down the song, work on those sections, and then chain it all together. The app uses time stretching so that the pitch of the music is not affected.

As someone already familiar with the included Metallica songs, I can say that Yousician did an impressive job with these complete transcriptions. I’ve already learned a few tricks and learned a few better ways to play these songs, even for very simple parts like the opening riff of “Enter Sandman”. I’ve known this song basically since I first picked up a guitar, but Yousician identified that Hetfield was playing the riff with his left hand in a rather unconventional finger position, a position that isn’t straightforward but makes notes clearer once you master it. .

The lead guitar parts are also incredibly detailed, given the speed and complexity of some of Hammett’s solos. This is one instance where I’m sure it helped to have access to Metallica’s master recordings for these songs; being able to isolate parts and slow things down makes the learning process much more accessible and probably made a difference in the accuracy of the transcriptions as well. While I can’t say the notation for extremely fast solos like “One” or “Battery” is 100% accurate, it should be good enough for a convincing performance.

Unfortunately, I ran into a few issues while trying to tackle the aforementioned epic, “Master of Puppets.” While going through the downpicking lessons, I was introduced to the riff played during the main verse. Whether it was my own incompetence, Yousician not hearing me well enough, or some other unknown issue, I just couldn’t play the riff accurately enough to move forward. It’s certainly fast, but even at slower speeds, Yousician still didn’t recognize that I was hitting the slippery power chords that anchor the end of the riff. A colleague of mine had tried Yousician before and had a similar issue with the app not recognizing his game, which can be a big disappointment if you’re trying to pass every lesson.

I can’t say why it happened with that particular riff. Yousician did a great job of hearing me play the song’s intro, which is just as fast-paced and quite complex on its own. There seemed to be something specific to those sliding chords that the app struggled to pick up. I’m not trained enough to attempt the fastest solos offered by Metallica’s course, so I can’t say how well it will pick them up, but it did a good job of recognizing the fast, arpeggiated licks towards the end from the solo “Fade to Black”. Yousician understood things better when I plugged my guitar directly into my computer using the iRig 2 interface. But since I don’t usually use my computer directly, I hadn’t configured any amps or of virtual effects, which meant playing wasn’t as fun as it was with my amp.

Despite these occasional issues, I really enjoyed the Yousician Metallica course. Whether it’s worth it is another question – Yousician costs $140 per year or $30 per month. It’s not cheap, but it’s cheaper than the private guitar lessons I took 20 years ago. Obviously Yousician can’t tailor their lessons to my needs, but I’m still impressed with the attention to detail and comprehensive nature of the Metallica course, and there’s also a whole host of other things I could play. Between the accuracy of transcriptions, a solid song selection, and the ability to slow down tracks for practice, there’s a lot to like here.

It certainly would have been a fantastic tool when I was learning guitar as a teenager – but in 2022 there are a huge variety of options for learning your favorite songs. This is probably the biggest catch with Yousician. Most people will probably be happy to watch instructional videos on YouTube and search for free transcripts online. I just did a quick search on “Master of Puppets guitar lesson” and found a ton of great videos, including a multi-part one where the instructor spent ten minutes demonstrating the first two riffs. It was an in-depth, detailed lesson from someone who clearly knows the song as well as Metallica’s approach to playing in general.

That said, I always encourage Metallica fans to check out a monthly subscription to Yousician. The song selection ranges from the simplest tracks to some of their most difficult bits, making it useful regardless of your skill level. Video content is entertaining and informative; you don’t often see a band speak so candidly about their approach to playing their instruments. And as good as some YouTube lessons are, being able to watch and play with detailed tablature transcriptions of blazingly fast guitar solos makes for a much better learning experience. These transcriptions combined with the original Metallica master tracks that you can slow down or speed up as needed are a great practice tool. For anyone looking to unleash their inner Eddie Munson, Yousician’s Metallica course is a great place to start.

All products recommended by Engadget are selected by our editorial team, independent of our parent company. Some of our stories include affiliate links. If you purchase something through one of these links, we may earn an affiliate commission.

Understanding Payday Loans – The Basics and Beyond